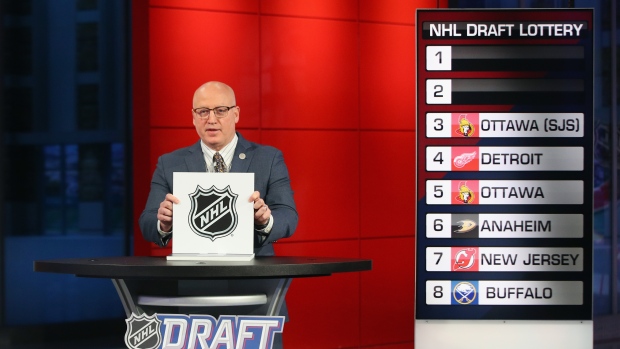 The team that will pick first in the 2020 NHL Entry Draft will be determined at a later date after a placeholder won the first phase of the Draft Lottery on Friday night.

Eight teams that are eliminated from the qualifying round of the NHL's return to play will each have a 12.5 per cent chance at winning the No. 1 pick.

Phase 2 will take place following the qualifying round and before the first round of the 2020 NHL playoffs.

The Ottawa Senators will select third and fifth in the draft.

The Senators had the best chance of winning the lottery. They held the second-best chance with their own spot in the lottery at 13.5 per cent. They also held the San Jose Sharks pick at 11.5 per cent after acquiring the selection in a trade that sent defenceman Erik Karlsson to the Bay Area. That put the Senators chances at 25 per cent.

The Detroit Red Wings finished with a league-worst .275 points percentage and had the next best chance at winning the first-overall pick with an 18.5 per cent. Detroit was bumped down the maximum three spots to 4th.

The Los Angeles Kings moved up from 4th to claim the second-overall selection.

The Anaheim Ducks have the 6th pick. Followed by the New Jersey Devils with the 7th pick.

The Buffalo Sabres will select 8th.

Alexis Lafreniere of the QMJHL’s Rimouski Oceanic is the consensus No. 1 prospect heading into the draft.