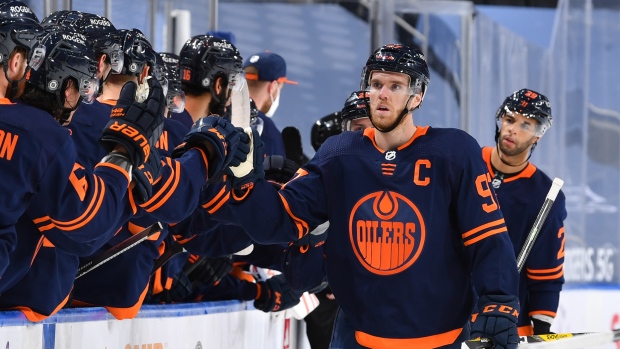 Edmonton Oilers captain Connor McDavid ran away in the voting to win his second Hart Trophy as NHL MVP on Tuesday, much like he blew away the competition while leading the league in points.

The NHL presented its awards remotely for a second consecutive season because of the coronavirus pandemic. In previous years, the awards ceremony was held in Las Vegas with an audience and players present.

McDavid doubled up on honors by also winning his third Ted Lindsay Award as the league’s most outstanding player, which is voted on by NHL players.

The 24-year-old McDavid, who also won MVP honors in 2017, had already won his third Art Ross Trophy in six seasons for leading the NHL with 105 points (33 goals, 72 assists) in 56 games. The next closest player to McDavid in the points standings was teammate Leon Draisaitl with 84, with Boston’s Brad Marchand a distant third with 69.

Vegas' Marc-Andre Fleury beat out Tampa Bay’s Andrei Vasilevskiy and Colorado’s Philipp Grubauer to win his first Vezina Trophy as the NHL’s goalie of the year. The Golden Knights tandem of Fleury and Robin Lehner already won the William M. Jennings Trophy, for combining to allow an NHL-low 124 goals this season.

The 36-year-old Fleury finished third in the NHL with 26 wins, a 1.98 goals-against, .928 save percentage and six shutouts in 36 games. He also closed the season with a nine-game winning streak, while moving into third place on the NHL career list with 492 wins.

He also ranked seventh among skaters in ice-time. Fox became the second player to win the Norris in his second season, joining Bobby Orr winning in 1968.

Hedman, who won the honor in 2018, was a finalist for a fifth consecutive year, matching the longest streak since fellow Swede Nicklas Lidstrom enjoyed a six-year run from 1998 to 2003.

Minnesota’s Kirill Kaprizov won the Calder Memorial Trophy as rookie of the year in becoming just the fourth rookie since 1993-94 to lead his team in scoring. The 24-year-old from Russia led NHL rookies with 27 goals and 51 points, and became the first Wild player to win the Calder.

The Oilers players have now won the Hart in three of the past five years, with Draisaitl winning it last year.

McDavid was informed of winning the both awards by Draisailt.

“To have your fellow peers recognize you, it means a lot. Just feel so humbled and grateful to have won this award a few times,” McDavid said, before personally thanking Draisaitl for personally helping contribute to his point production.

The NHL previously announced other winners, with Carolina’s Rod Brind’Amour winning the Jack Adams Award as coach of the year, and New York Islanders Lou Lamoriello winning the Jim Gregory general manager of the year award.

Philadelphia’s Oskar Lindblom, a cancer survivor, was this year’s recipient of the Bill Masterton Memorial Trophy, presented to a player who exemplifies perseverance and dedication to hockey.