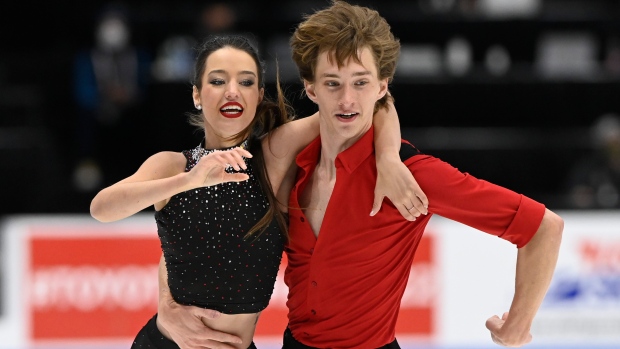 NASHVILLE, Tenn. (AP) — Ashley Cain-Gribble and Timothy LeDuc laid down a dazzling pairs program that Jessica Calalang and Brian Johnson were unable to match Saturday night, giving them the title at the U.S. Figure Skating Championships — and almost certainly one of the two spots at next month's Olympics.

Cain-Gribble and LeDuc led Calalang and Johnson by two points after their short program, and the 2019 champions nailed every element from an opening triple twist to an incredible finishing death spiral to finish with 225.23 points.

That put them well ahead of Calalang and Johnson, who couldn't overcome three mistakes in the first half of their program to catch up. They finished in second place with 209.87 points with Audrey Lu and Misha Mitrofanov in third.

“I don't have a lot of words. It's just crazy,” Cain-Gribble said. “We've visualized this moment so many times and to have done a performance like that, and the whole week the way it went — it's just surreal.”

Unlike the other disciplines at the Beijing Games, the Americans only qualified two spots in pairs. One of them is expected to go to Alexa Knierim and Brandon Frazier, who are petitioning for a spot after the favorites were forced to withdraw from the national championships when he tested positive for COVID-19 earlier in the week.

That left Cain-Gribble and LeDuc in a showdown with Calalang and Johnson for the other spot on the team.

“I feel like we created a really strong body of work going into this competition,” LeDuc said. “We hope what we did here was confirmation of that. And we have room to grow at the Olympics.”

Earlier in the day, men's competitor William Hubbart and ice dancers Raffaella Koncius and Alexey Shchepetov withdrew following positive COVID-19 tests. They joined two-time U.S. champion Alysa Liu, Amber Glenn and defending pairs champ Knierim and Frazier in sitting out at least a portion of the competition due to the virus.

Like Knierim and Frazier, Liu petitioned U.S. Figure Skating for a spot in Beijing. She was chosen by a committee Saturday along with U.S. champ Mariah Bell and runner-up Karen Chen, who will appear in her second Olympics.

“I'm really excited. I've basically been training forever for this moment,” said Liu, adding that she felt fine health-wise, “and I'm really happy (with) the decisions I've made, because apparently they were all pretty good ones. I'm here right now.”

Chen began pursuit of his sixth consecutive national title by setting a record of 115.39 points during his quad-tacular short program. Zhou followed with a personal-best 112.78 points that included a quad lutz-triple toe loop.

“This is up there,” Chen said, when asked how his program stacked up historically. “There's been amazing performances done over the history of skating. I can't say it's definitive, but certainly during my career it's one of the standout few.”