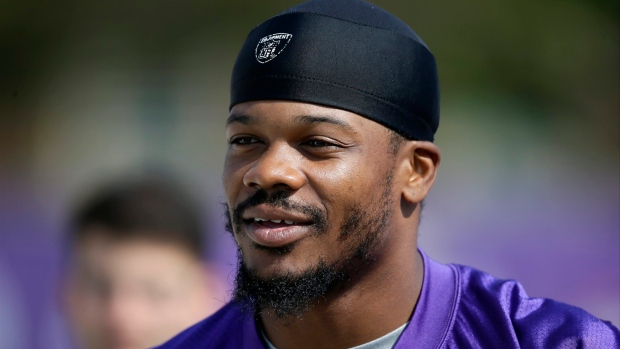 SANTA CLARA, Calif. - The NFL suspended San Francisco 49ers wide receiver Jerome Simpson on Tuesday without pay for the first six games of the season for violations of the league's substance-abuse policy — a penalty he hopes is his last after a rash of off-field issues have derailed his career.

The 49ers were aware of a likely suspension for Simpson for previous issues, but nothing that is known to have occurred since he joined the 49ers on a two-year deal as a free agent in March. San Francisco has made it clear he must continue to demonstrate positive behaviour to remain in good standing with the team.

"Look, there's consequences to everything you do. Jerome was out of football for a year," coach Jim Tomsula said after practice. "We know there were things in the past year, what he's doing now, he's doing everything we're asking him to do. He's on a good plan. He also understands there's no margin for error. I do believe in Jerome. And I think this is going to be a success story."

Simpson can return to the active roster on Oct. 19, a day after the team's home game against the Baltimore Ravens. He can still participate in all preseason practices and games.

The 29-year-old wideout, who had been a candidate to be San Francisco's No. 3 receiver behind Anquan Boldin and Torrey Smith, served a three-game suspension to start last season with Minnesota before the Vikings cut him as he faced more trouble involving drugs and alcohol.

"The probability of a suspension was known when we signed Jerome," general manager Trent Baalke said in a statement. "Since joining the 49ers, Jerome has proven to be a great teammate. Although he will not be able to participate in the first six weeks of the season, Jerome has done everything asked of him, both on and off the field. We are in full support of the NFL's decision, and look forward to Jerome's future contributions to our organization."

The suspension announced Tuesday stems from a legal case last year, yet another run-in for Simpson in a long list of them.

Now, he is focused on returning after his suspension and staying on the field.

"It's been a blessing to get back to playing football. I was off for a year," Simpson said. "I'm just blessed to be with this organization of people that stand behind me, really believe in Jerome Simpson. I'm just really committed to proving the people that are behind me right. That I can turn it around and be a success story, and just prove people wrong, and use my natural abilities to go out here and catch the football."

The 49ers have employed several players with legal problems in recent seasons, prompting CEO Jed York to say after the 2014 season ended that the team needed to be better. Excluding Simpson, San Francisco had 12 arrests involving seven different players since January 2012, most in the NFL.

"Our mission is very simple: the San Francisco 49ers win with class. We haven't won, and I don't think we've conducted ourselves with the level of class that I expect of our organization," York said then. "We've had off-the-field issues. That's going to happen in sports. The level that it's happened here is not unacceptable."

Simpson was arrested in November 2013 on suspicion of drunken driving. Then in January 2014, he avoided jail time after pleading guilty to careless driving and refusing to take a DWI test. In return, prosecutors dropped a misdemeanour charge of driving while impaired. That case resulted in his 2014 suspension while with the Vikings.

Simpson also served a three-game ban in 2012, stemming from a felony drug conviction for a marijuana shipment authorities found at his home in Kentucky while he played for Cincinnati in 2011.

A second-round pick by the Bengals in 2008, Simpson played his first four seasons in Cincinnati before joining Minnesota. His 726 yards receiving were a career high in 2013, which came on 48 receptions with one touchdown catch.

Even Simpson was somewhat surprised the 49ers took a chance on him.

"But the coaches here, ownership, they believed in me," he said. "They did a background check. I came in for a workout, interview. I just put everything out on the table and told the truth. Just come here and work hard and just prove these guys right, that they did make a great decision."