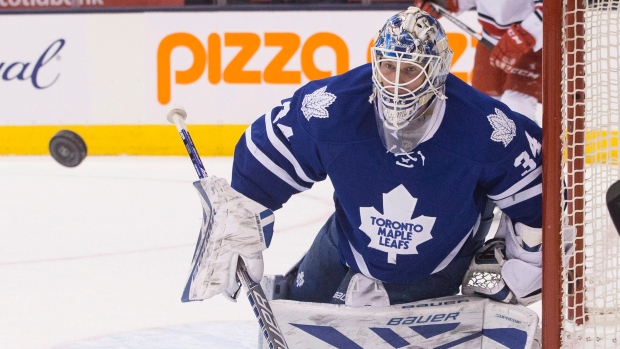 The Toronto Maple Leafs sent the goaltender, along with forward Jeremy Morin to the San Jose Sharks in exchange for goaltender Alex Stalock, forward Ben Smith and a conditional fourth-round pick in the 2018 NHL Entry Draft.

"James is an experienced NHL goaltender who will help add to our depth at that position as we head down the stretch run of the season," Sharks general manager Doug Wilson said in a statement. "Jeremy gives our group another versatile forward and a player that our coaching staff is familiar with. We're excited to add them both to our organization."

He is playing the final season of a two-year, $4.6 million contract and slated to become an unrestricted free agent this summer.

"Obviously I had a lot of good years," Reimer said shortly after the trade was completed. "It's definitely a weird feeling to be going somewhere else."

The trade ends an up-and-down tenure in Toronto for the netminder.

Most notably, Reimer started 33 of 48 games for the Leafs in the 2013 season and all seven playoff games.  However, he allowed three goals in the final 11 minutes - including two in the final 90 seconds - of Game 7 against the Boston Bruins as the Leafs blew a 4-1 lead. The Leafs lost the game in overtime. In the following offseason, Toronto acquired goaltender Jonathan Bernier in a trade with the Los Angeles Kings.

Reimer and Bernier had shared the crease in the three seasons since, each experiencing their own highs and lows.

Morin, 24, was acquired by the Leafs in January from the Chicago Blackhawks in exchange for forward Richard Panik and has been with the Toronto Marlies of the American Hockey League since the trade.

Originally a fourth-round pick of the Sharks in the 2005 NHL Entry Draft, Stalock has a career 24-19-7 record in 62 careers games.

TSN Hockey Insider Pierre LeBrun of ESPN.com reports that no salary was retained in the deal.

The Leafs are next in action on Saturday night when they visit the Montreal Canadiens. Goaltender Garrett Sparks has been recalled to the team from the Marlies.