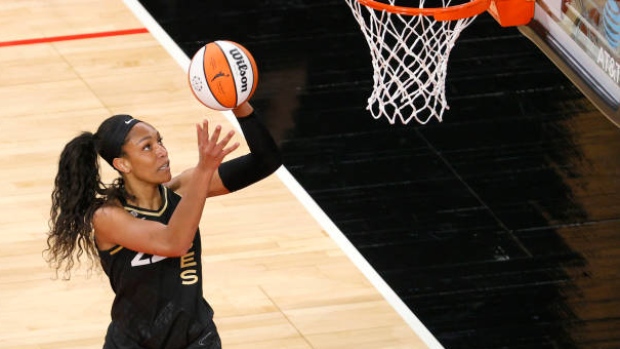 NEW YORK -- — With the Las Vegas lead down to one and just under 4 minutes left, Aces coach Bill Laimbeer was angry with the way his team was playing and called a timeout.

The Aces responded by scoring 14 of the next 15 points — the first four by A'ja Wilson — to put the game away.

"I called timeout to yell at them to ‘Get the ball to A'ja Wilson' and that was the end of the game."

Wilson finished with 30 points and 13 rebounds and the Aces beat the New York Liberty 94-82 on Thursday night.

"We won the game. That's about the good positive I have," Laimbeer said. "I think we made some mistakes in this game. We didn't play our game ... we didn't play smart."

The Aces led 80-79 with 3:59 left after New York had rallied from a 19-point first half deficit. After a timeout, Las Vegas took over.

Wilson hit a basket and then got to the line for two more points. While she was on the foul line, Liz Cambage was called for a technical foul and New York converted the free throw. That was the team's only point until Betnijah Laney hit a jumper with 8.3 seconds left and the game well out of reach as Las Vegas had scored 14 of 15 to take command.

Laney scored 23 points to lead New York (5-3). She has reached 20 or more points in all eight games this season. Rebecca Allen added 16 and Sami Whitcomb had 14.

Las Vegas built a 19-point lead in the first half behind Wilson before Allen got hot for the Liberty. She scored 14 consecutive points for New York to avoid this game becoming a rout by the half.

Las Vegas led 52-44 at the break as Wilson had 16 points, seven rebounds and four assists in the opening 20 minutes.

Las Vegas made 26 of 29 from the foul line while New York was just 7 for 9. The 20 shot difference was something that Liberty coach Walt Hopkins was disappointed in.

"Would be a very smart move for me to not comment on the refs right now," Hopkins said. "Free throws were the difference in the game. I will say that free throw discrepancy is something."

Kelsey Plum returned to the Aces after missing six games while helping the U.S. qualify for the Tokyo Olympics in 3x3. It's the first time that the Olympics will have 3x3 basketball in it. Plum entered midway through the first quarter and picked up two quick fouls. She finished with four points, three rebounds and two assists.

"She's going to get back in the swing of things," said teammate Chelsea Gray. "It was her first game back and looking forward to the next one against D.C."

Aces: Visit Washington on Saturday to close out a three-game trip.