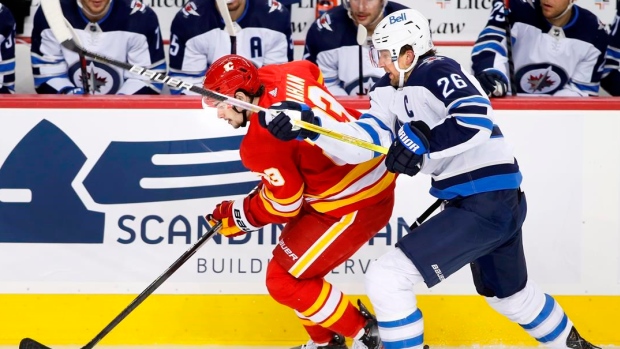 American Thanksgiving, which arrives about fifty days into the NHL’s regular season, has become a notable mile-marker for teams.

The majority of teams entrenched in playoff spots at the time of the holiday tend to end up being the teams who qualify for the post-season at year-end – depending on the time period you are sampling, it’s around 75 per cent.

Front offices are always counter-weighing performance against time. A lot of this comes down to risk management, and it works in both directions. Front offices want to get aggressive with high-performing teams; similarly, front offices prefer to get conservative with under-performing teams. Living at the polar end of each spectrum (managing a Stanley Cup contender versus, say, managing a team rapidly moving towards the draft lottery) makes roster decisions a bit easier to digest. The teams in the muddied middle? Well, sentiment can change on a weekly basis.

One of the curious things about using American Thanksgiving as the first notable cut-off in which we measure current performance versus future time remaining is there’s nothing unique about its ability to indicate what the path forward looks like. For example, teams that are just two calendar weeks into the regular season and sitting in a playoff position on that day qualify for a playoff berth about 65 to 70 per cent of the time. The Christmas/Boxing Day holiday window shows about 83 per cent of teams in playoff positions will qualify by season end; by the time the NHL’s trade deadline rolls around, it’s well above 90 per cent: 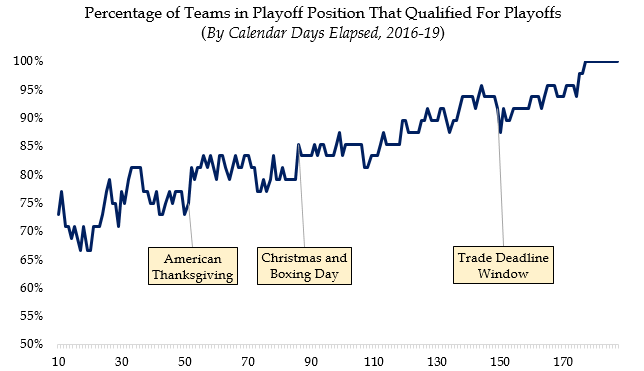 Though there is a tremendous amount of jockeying in the NHL standings (especially when it comes to seeding), the reality is the majority of playoff teams establish themselves early on and invariably qualify at season's end. Most of the high-powered, ultra-talented teams establish themselves early on and coast towards a berth. And what’s left are the average teams who have puck luck early on trying to fend off other teams of similar quality, who simply have had less luck in the percentages (be it shooting percentage, save percentage, or a combination of the two) to open the year.

It can be a fun race to watch, but it’s a relatively small race. Consider the teams in playoff positions right now, on December 2, and how we might bifurcate the two groups:

We aren’t two months into the regular season and there is clear stratification between the two groups. Only two teams currently sitting in their conference’s top-eight – the Columbus Blue Jackets and Nashville Predators – are underwater in expected goals, and all 16 teams in playoff positions have outscored their opponents on the season.

But more notably: which of the 16 non-playoff teams through December 2 would you bet on qualifying for the post-season by year end? Knowing the percentages, we can reasonably assume two to three non-playoff teams today will be playoff teams come April. In the East, the Pittsburgh Penguins look like the most obvious candidate, a team that’s outscored their opponents, is playing relatively well, and has just been crushed by poor shooting luck in the offensive zone this season. In the West, you have a few good options between the upstart San Jose Sharks, a Winnipeg Jets team icing the best goaltender in the world, or a Vegas Golden Knights team that’s struggled mightily to stay healthy. These are very competitive teams and, at least in the middle-of-the-pack segment, are probably the few teams who might consider buying at the trade deadline.

But for the majority of the non-playoff teams, the regular season is over – three Canadian clubs (Vancouver, Montreal, Ottawa) already qualify for that honour. And you don’t need the American Thanksgiving checkpoint to adjudicate that. Each passing week gives us more confidence in a team’s true talent and their future outlook, and by the time you hit December, the playoff landscape has already started to take shape.