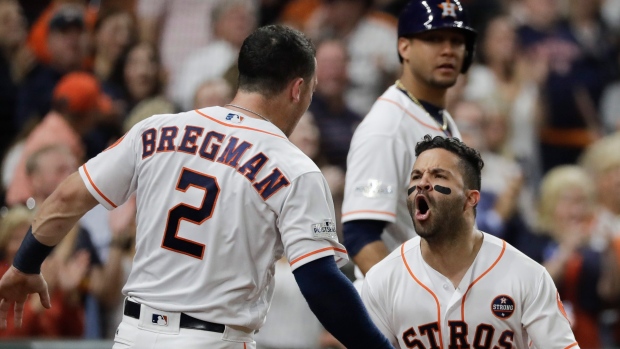 When the Houston Astros won the World Series for the first time ever in 2017 just months after Hurricane Harvey devastated much of Louisiana and South Texas, it was one of the best stories in sports.

Now, there’s a different story tied to the Astros’ 2017 title. One that shifts them from heroes to villains.​

As the baseball season sits on hold until the COVID-19 situation clears up, TSN.ca takes a look back at the cheating scandal that rocked the sport to its core and turned a team into the most hated in baseball.

How it all began

There is a broad story about this era of baseball that has yet to be told.

That was the opening line from The Athletic's story in mid-November written by Ken Rosenthal and Evan Drellich starting everything.

The article detailed that four people with the Astros in 2017, including starter Mike Fiers, who said the Astros stole signs during home games using a centre field camera and relayed them to hitters in real time by banging on a garbage can. Upon publication, The Athletic's reporting only confirmed sign-stealing in 2017.

The story added the MLB's investigation into the Astros at the time, which was being conducted in the wake of the Brandon Taubman incident, could expand to sign-stealing.

As The Athletic's story made its rounds, people went searching for answers of their own.

Jimmy O'Brien of Jomboy Media seemed to find some. Later that day, a O'Brien posted a video on Twitter appearing to confirm what the story said. The video featured an at-bat between Danny Farquhar of the Chicago White Sox and Astros slugger Evan Gattis containing audible bangs before each off-speed pitch.

Gattis took a couple close pitches and fouled off a few more, causing Farquhar to step off the mound to call out his catcher. After presumably changing their signs, Farquhar struck out Gattis with an off-speed pitch down and in. There was no bang prior to Farquhar's final delivery.

Videos continued to filter in as people combed through footage from 2017. Sure, the evidence was circumstantial, but it looked about as solid as it gets.

If a team was willing to cheat in the first place, its logical they'd take other measures besides banging on a garbage can. Or at least that's what sources told Joel Sherman of the New York Post.

"In recent days I have had scouts and executives talk to me about a variety of methods they think have been or could be employing, such as a realistic-looking electronic bandage placed on a players body that buzzes in real time to signal what is coming," Sherman wrote in a mid-November story.

Buzzer allegations picked up steam. A photo of Altuve from the 2017 World Series appeared to show something under his jersey. A clip from Altuve's walk-off home run in the 2019 ALCS against the New York Yankees, when Altuve seemed to tell teammates not to rip off his jersey at the home plate celebration, didn't help.

There were more signs. Rather than remove his jersey to put on his new American League championship t-shirt, Altuve went into the clubhouse to change. When asked live on the air post-game why he didn't want his teammates tearing away his jersey in celebration, Altuve said he was shy.

Could a buzzer have been telling Astros hitters what pitch was coming instead of trashcan bangs?

Altuve and the Astros have vehemently denied the use of buzzers and MLB said they found no evidence in their eventual investigation findings.

As the weeks passed since The Athletic's article and more presumed evidence came to light, the baseball world gathered at the Winter Meetings in San Diego.

The Astros preached business as usual with manager A.J. Hinch. But by all accounts, there was an elephant in the room.

"This is probably the most thorough investigation that the commissioner's office has ever undertaken," commissioner Rob Manfred told reporters.

"It is my hope to conclude the investigation just as promptly as possible, but its really hard to predict how long something like that is going to take."

A month later, we finally had our answer.

Earlier in the month, Bob Nightengale of USA Today reported the MLB was expected to hand down one of the harshest penalties in sports history.

In a nine-page ruling, Manfred fined the Astros $5 million, stripped them of their first and second-round picks in each of the next two MLB Drafts and suspended Hinch and general manager Jeff Luhnow for the 2020 season. Almost immediately after the punishment was announced, both Hinch and Luhnow were fired by owner Jim Crane, who said the organization was moving forward with a clean slate.

"I find that the conduct of the Astros, and its senior baseball operations executive, merits significant discipline," Manfred said as part of the ruling. "I base this finding on the fact that the club's senior baseball operations executives were given express notice in September 2017 that I would hold them accountable for violations of our policies covering sign stealing, and those individuals took no action to ensure that the club's players and staff complied with those policies during the 2017 postseason and the 2018 regular season."

Hinch and Luhnow were just the start.

Alex Cora was the next domino to fall, being fired by the Boston Red Sox just one day after Manfred's report implicated him for his role as a bench coach on the 2017 Astros. The report mentioned him 11 times, describing him as a key figure in the planning and execution in the sign-stealing scheme.

Interestingly enough, the Red Sox are currently being investigated for similar violations occurring in 2018. Cora served as manager and led the team to a World Series victory, just like the Astros.

Next up was Carlos Beltran, not even three months into his tenure as skipper of the New York Mets.

Beltran was the only player implicated in MLB's report. After initially denying involvement, it was determined he played a pivotal role.

When the Astros arrived at camp in mid-February, people wanted answers. Particularly from Altuve. Carlos Correa went to bat for his teammate, telling reporters Altuve didn't want his jersey torn off months earlier because he got an "unfinished tattoo on his collarbone that honestly looked terrible."

Two days later, Altuve walked into the clubhouse shirtless, exposing a tattoo that read 'Melanie'. A photo from the 2019 World Series -- which the Astros lost in seven games to the Washington Nationals -- showed what appeared to be the corner of a letter M, lining up with Correa's explanation.

Does it prove anything? Not really. Once MLB concluded they hadn't found any evidence of buzzer usage and Astros players denied it, saying it definitively becomes hard. We might never know for sure.

When teams arrived for spring training in February before its eventual shutdown due to the coronavirus outbreak, pretty much everyone from players to managers and even front office staff were asked about the Astros situation and its impact on the game.

According to Astros owner Jim Crane, it didn't have one.

"Our opinion is that this didn't impact the game, Crane told reporters on Feb. 13. "We had a good team, we won the World Series and well leave it at that."

Other Astros took a different approach. Former utiliyman Marwin Gonzalez said he was remorseful for "everything that we did as a group and the players that were affected directly by us doing this." Correa called it "straight up wrong." Closer Ken Giles, now with the Toronto Blue Jays, claimed he had no knowledge of any sign-stealing taking place and said he would be willing to give back his World Series ring if asked.

Still, there was anger around baseball. Lots of it.

Washington Nationals general manager Mike Rizzo was unsatisfied with the Astros' apologies. Chicago Cubs third baseman Kris Bryant said he believed Houston would still be doing it if they hadn't gotten caught. Cody Bellinger said the Astros stole a ring from the L.A. Dodgers in 2017.

It probably wasn't an accident he used the word "stole."

But that was all last month. Now, baseball, like the rest of the world, has a much bigger issue at hand with COVID-19. The Astros scandal seems like eons ago considering everything that's happened. We will have to wait and see for quite some time how fans and opposing players react to the Astros once the season gets underway, if at all.

People might not be thinking about the Houston Astros stealing signs much right now, but it doesn't mean they've forgotten.