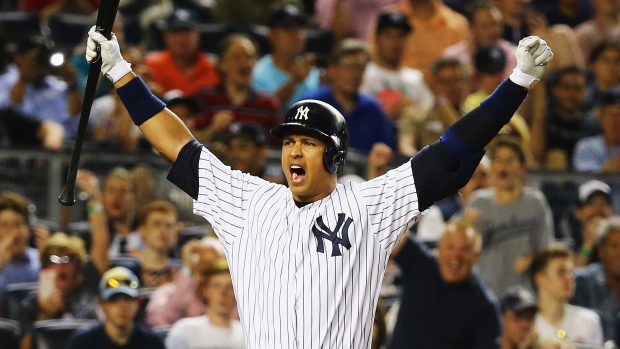 NEW YORK, N.Y. - The fan at Yankee Stadium who wound up with the ball that Alex Rodriguez launched for his 3,000th hit is holding on to the prized souvenir.

"At first, I was 100 per cent adamant about not giving the ball back," Zack Hample told The Associated Press by telephone late Friday night. "Now, I'm thinking about it."

"I'm not making any definite decisions tonight and probably not tomorrow, either," he said an hour after New York beat Detroit 7-2. "I want to enjoy the moment."

The 37-year-old Hample has some experience in this area. He describes himself as a pro at catching home run balls, has written books about the art and has snagged — get this — a whopping 8,161 baseballs at stadiums around the country.

"Got 12 tonight. Got 11 in batting practice and one during the game by some guy," he said, laughing.

Hample is a New Yorker and a Yankees season-ticket holder. He was in his favourite spot — section 103, row 12, seat 24 — in right field when Rodriguez connected for a solo shot in the first inning.

Hample raised his Rawlings glove, but the crowd surge pushed him forward. Good fortune was on his side, however.

"I looked down and the ball was at my feet. It ricocheted, and it was almost touching my shoe," he said.

Hample snapped up the ball and posted a picture of it on Twitter. Quickly, the Yankees visited him and tried to see what it would take to make a deal. Not an easy negotiation, either.

A day earlier, Hample tweeted about Rodriguez: "That man deserves favours from no one, least of all a fan."

After talking to the Yankees, Hample posted that he "told the Yankees I'm keeping it."

Rodriguez, meanwhile, later mentioned the fan who snared Derek Jeter's home run ball for his 3,000th hit in 2011. That man was all too eager to return it to the former Yankees star.

In the late innings, it appeared to be a lost cause. Yankees spokesman Jason Zillo said efforts to have the man deal directly with team president Randy Levine didn't work.

"As far as we're concerned, we have done everything we could to engage this guy in some type of discussion about some type of exchange. He had none of anything we were saying. He wouldn't engage at all," Zillo said. "He is not intending to give it to us."

Hample has returned balls in the past. He said he gave back the first home runs hit by Mike Trout and Didi Gregorius, free of charge.

"This is something more special," Hample said.

But Hample ended up watching the ninth inning with Levine and Chief Operating Officer Lonn Trost, and said he's considering what to do.

"They were so nice, and that made me think about what I want to do," Hample said. "There's no right or wrong in this. We'll just see."