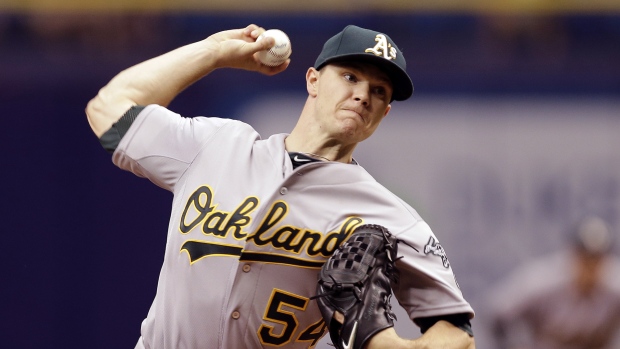 ST. PETERSBURG, Fla. - Sonny Gray was sore, but he could handle it. Wins tend to have that effect.

Gray (5-2) was hit on the lower leg by James Loney's grounder in the fourth, and stayed in for a while longer.

"It feels OK ... not great," Gray said. "Probably just a couple days of treatment and stuff, and more than likely be ready to go."

"After the fourth inning it got really, really tight and stiff," Gray said. "I just wasn't able to push off."

"We know about Sonny Gray, he's as good as anybody in the American League," Rays manager Kevin Cash said.

Billy Burns hit the first pitch of the game into the right-field seats for his first major league homer.

"That was a surprise ... It wasn't a surprise he swung at the first pitch," Melvin said with a smile.

"I was kind of shocked, honestly," he said.

Burns got his first big league RBI on Saturday night with a bases-loaded walk. He then topped that in the top of the first against Erasmo Ramirez.

Mark Canha and Josh Reddick also homered as the A's won consecutive games for the second time this season. The only other time they did it was April 13-14 against Houston.

"We came in here the first two games and looked pretty bad," Gray said. "To turn it around the last two, it was some big wins for sure."

Ramirez (2-2) took the loss as Tampa Bay wound up with a four-game split after winning the first two games.

Canha put the Athletics up 5-0 with a three-run homer in the sixth Ramirez. It was Canha's fourth hit in his last 43 at-bats.

Reddick made it 6-0 with a solo homer in the seventh.

Logan Forsythe cut the Rays deficit to 6-2 with a two-run single during the eighth.

Steven Souza Jr. made contact with A's catcher Stephen Vogt as he was being tagged out while trying to score from first base on Loney's first-inning single. When left fielder Sam Fuld threw the ball to second base, Souza continued past third but was thrown out at the plate by shortstop Marcus Semien.

Vogt hit a sacrifice fly in both the third and ninth innings.

Athletics: 3B Brett Lawrie (back) is feeling better but was out of the lineup for the second straight game. ... INF-OF Ben Zobrist (knee) is expected back Monday. ... LHP Drew Pomeranz (shoulder) will resume playing catch Monday. ... LHP Eric O'Flaherty (shoulder) could start a rehab assignment this week.

Rays: Souza left in third with a sprained left wrist, which occurred on a swing. He said X-rays were negative. ... SS Asdrubal Cabrera left with a strained left groin. ... Loney played the whole game, but was wearing a brace postgame after spraining his left middle finger. He was hurt sliding into third base on an eighth-inning stolen base.

Oakland had scored just nine runs in five games before getting a combined 12 Saturday and Sunday.

Athletics: Losers in 12 of their last 14 home games, the A's host Detroit and former Oakland OF Yoenis Cespedes on Monday.