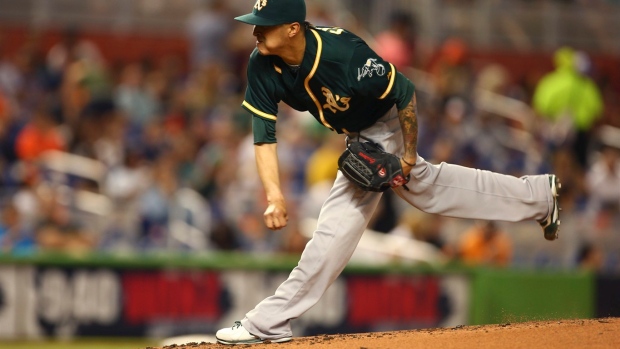 Athletics benefit from replay reversal and score 4 in 9th off Cishek to beat Marlins 9-5 Article Image 0 , The Canadian Press

MIAMI - With the score tied in the ninth inning, Coco Crisp slid across home plate on a close play, rose and signalled safe as umpire Marty Foster indicated out.

A 3 1/2-minute replay review determined Foster was wrong and Crisp was right.

Thanks to the ruling reversal, Crisp scored the first of four runs in the inning off closer Steve Cishek, and the Oakland Athletics bounced back after blowing a four-run lead to beat the Miami Marlins 9-5 on Friday night.

"We just go out there and keep battling," Crisp said.

Josh Reddick's two-out RBI triple tied the game in the eighth. Crisp singled to start the ninth against Cishek (4-3) and took second on Alberto Callaspo's single. When Yoenis Cespedes followed with a single, right fielder Giancarlo Stanton made a strong throw home, and Crisp was ruled out at the plate.

After the lengthy deliberation, the call was overturned to give the A's a 6-5 lead, and their dugout erupted in celebration.

"It's a huge game-changer, so you're still going to be pumped up no matter whether it's 5 minutes after it or right when it happens," Reddick said. "Fortunately they made the right call up in New York."

Josh Donaldson hit a sacrifice fly for his third RBI, and Stephen Vogt and Reddick followed with run-scoring singles.

"I felt fine. I just didn't get the job done," Cishek said. "For some reason things just unraveled. I thought I made good pitches, but once it got later the pitches stayed up."

Reddick had three of the Athletics' 16 hits. The AL West leaders kept swinging even after Miami overcame a 4-0 deficit against Jesse Chavez by scoring five runs in the sixth.

"It shows what kind of character we have," Chavez said. "We don't give up even if we do have a bad inning like that. We don't let it affect the way the rest of the game is going to play out. That's the big key for us and our success."

Left fielder Cespedes had two hits and threw out Stanton trying to score from second on a two-out single in the third. Cespedes leads all major-league outfielders with 10 assists.

"Unbelievable throw," manager Bob Melvin said. "Not too many guys make that play, but we've seen it from him."

Luke Gregerson (2-1) pitched around a one-out double by Jeff Mathis in a scoreless eighth. Sean Doolittle had two strikeouts in a perfect ninth, extending his scoreless streak to 26 1-3 innings, longest in the majors.

"Unhumanly — that's a good word for it," Reddick said.

Marlins rookie right-hander Anthony DeSclafani left the game after three innings with a bruised right forearm, putting further strain on a bullpen already taxed by a 14-inning loss at Philadelphia on Thursday.

DeSclafani was hit in the arm by a line drive in the first inning by Brandon Moss that went for an infield hit, and his status is day to day. He allowed two runs in three innings, leaving him with an ERA of 7.40 after five career starts.

Oakland catcher Derek Norris left the game in the fourth inning with lower back tightness. He said he hopes to rejoin the lineup Sunday.

NOTES: With the Marlins' bullpen taxed by the marathon in Philadelphia, they recalled LHP Brian Flynn as a reinforcement and optioned INF Justin Bour to New Orleans. Flynn pitched three innings and allowed two runs, then was optioned back to New Orleans after the game. ... Callaspo batted second for the first time this season. ... The game was the Athletics' first in Miami since 2003. ... Athletics RHP Sonny Gray (7-3, 2.91) is scheduled to start Saturday against RHP Nathan Eovaldi (5-3, 3.52).