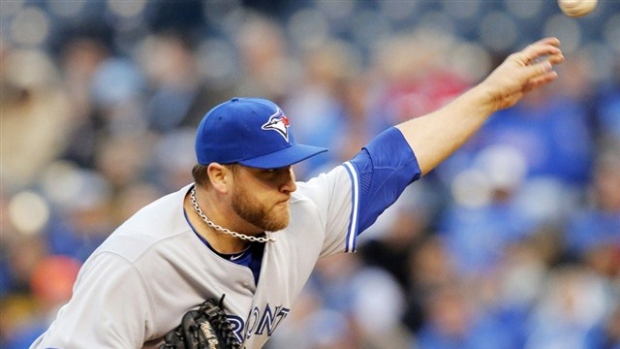 (SportsNetwork.com) - The Oakland Athletics pulled off the first big trade of the baseball season Friday. Now they'll try to secure a series win over the Toronto Blue Jays at O.co Coliseum.

The deal is expected to become official today.

On Friday, Melky Cabrera misplayed a ball in left field, which allowed Derek Norris to score the winning run from first base off a double from Nick Punto in the bottom of the 12th inning on Friday to carry the A's to a 1-0 win.

Chad Jenkins (0-1) allowed one run in his two innings of relief in taking the loss.

The Blue Jays, who also lost 4-1 to Oakland in the Thursday's series opener, had nine hits, left 10 men on base and went 0-for-8 with runners in scoring position.

Mark Buehrle will attempt to keep his bounce-back season going on Saturday.

The veteran left-hander had a tumultuous few seasons after departing the Chicago White Sox, with whom he spent the first 12 seasons of his career. Buehrle was part of the influx of big free agents that signed with the Miami Marlins in 2012 only to be sent to Toronto the following offseason.

After a middling campaign a year ago (12-10, 4.15 ERA), Buehrle, and the Blue Jays themselves, have been much better this year. The 35-year-old has pitched himself to a 10-5 record and posted an ERA of 2.50, which as it stands would be the lowest of his career. Should he maintain the pace he is on, Buehrle would break his previous nest mark (3.12 in 2005) by more than half a run.

Buehrle pitched against the White Sox his last time out and allowed two runs over eight strong innings. Unfortunately, the Blue Jays were unable to find any offense to support him as they fell 4-0. It continued a disturbing trend for Buehrle, who has lost his last four decisions and has not earned a win since June 1.

His career numbers against the A's are solid enough (3.63 ERA), but he has never consistently pitched his teams to victory against them, with an 8-13 overall record against Oakland.

Another lefty in the midst of a rebound year will oppose Buehrle in this one, as Scott Kazmir toes the rubber for Oakland.

Kazmir, who was one a dominant force for the Rays, struggled following a trade in 2009 that sent him to the Angels. Kazmir never found his way in Los Angeles, going 11-17 with a 5.31 in parts of two seasons. After spending the 2012 outside of Major League Baseball, he caught on with the Indians last season and then signed with the A's for this year.

The returns have been phenomenal for Oakland, as Kazmir has gone 9-3 with a 2.61 ERA in 17 starts. He is also doing a great job of keeping runners off base (1.026 WHIP), despite a dip in strikeouts per nine innings (7.9).

Kazmir bounced back from a miserable start when he last took the mound. Although he only lasted 5 1/3 innings, he managed to allow just a single run and strike out seven in a no decision against Detroit. In the previous start he had allowed a season-worst seven runs in just three innings against the Mets.

Kazmir has already pitched against the Blue Jays this season, starting against them on May 23. He allowed three runs over seven innings of work to take a loss in a 5-2 final. In 19 career starts he is 10-6 with a 4.01 ERA against Toronto.

Although Oakland has had the upper hand to start the weekend, Toronto has been the more dominant between these teams recently. The Blue Jays swept a three- game series at home from May 23-25 and won two of three in Oakland a season ago.