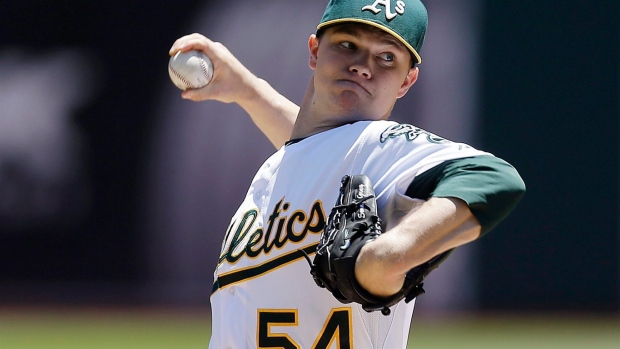 (SportsNetwork.com) - The Oakland Athletics will try to sweep the home portion of their Bay Bridge Series with the San Francisco Giants on Tuesday night as the clubs clash again at the Coliseum.

After winning three of four versus the Giants last season, winning both games at home, the A's claimed last night's opener in Oakland, 5-0. This four-game series will shift to San Francisco for two contests following tonight's meeting.

Oakland picked up its ninth shutout victory of the season on Monday, keyed by Jesse Chavez's career high-tying nine strikeouts over six innings. He was removed after throwing 101 pitches, with Fernando Abad, Dan Otero and Ryan Cook combining to allow one hit the rest of the way.

"He was a lot sharper, probably mixed in his breaking ball a bit more," A's manager Bob Melvin said of Chavez, who had given up nine runs over his previous 10 innings.

Alberto Callaspo stroked a two-run double and John Jaso had an RBI groundout for the A's, who have won five in a row and moved to 8-1 in interleague play on the year.

Oakland has posted a 0.75 earned run average over its last five games and added starters Jeff Samardzija and Jason Hammel in a trade with the Chicago Cubs over the weekend. Samardzija won his A's debut on Sunday, while Hammel is in line to start on Wednesday.

First, Sonny Gray gets the start tonight for Oakland as he faces the Giants for the first time.

The right-handed Gray is coming off a 4-1 win over Toronto on Thursday as he yielded just one run on four hits and three walks over seven innings. It marked the fourth time in his last nine outings he allowed two runs or fewer.

Gray, 24, is 8-3 with a 3.08 ERA on the year and faces a Giants squad that last night was shut out for the fourth time in eight games. San Francisco had a two-game win streak stopped and lost for the eighth time in 11 games.

Ryan Vogelsong gave up five hits and three runs across 5 1/3 innings on Monday to lose his third consecutive start.

"He was throwing the ball well. We just couldn't get some runs there for him," Giants manager Bruce Bochy said.

San Francisco was without third baseman Pablo Sandoval for a second game in a row because of a nagging elbow injury, but hopes to play today.

That would be a welcome sight for slated Giants starter Madison Bumgarner, who has lost two straight starts while giving up nine earned runs and 15 hits over a total of 11 innings versus Cincinnati and St. Louis.

Bumgarner has split two previous meetings with Oakland, posting a 5.68 ERA. He lost to them on May 27 of last year on the road, charged with four runs over 6 2/3 frames while yielding four hits and five walks.