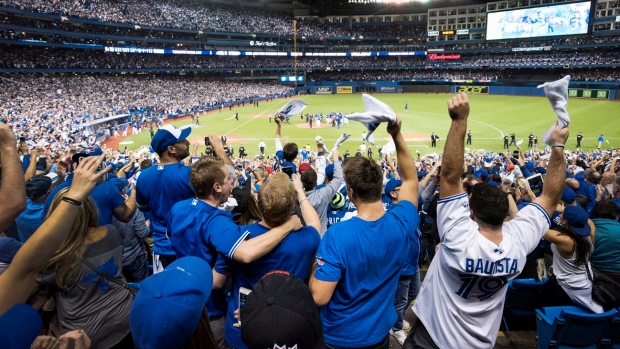 It was one of those moments where sports elevated itself above all else, at least for a few hours.

Where were you when Jose Bautista went deep in the bottom of the seventh, flipped his bat and rounded the basis while a city, a province and a country swooned?

You didn’t have to be a baseball fan to be moved by it, or even a sports fan to any significant degree.

You just had to be in some way sharing the experience with friends, family, colleagues at work. Heck, even perfect strangers.

We live in an age where our entertainment options are nearly limitless. A 1,000-channel universe, PVRs, the internet, a virtual digital paradise of whatever tickles your fancy.

But nothing can deliver the emotional wallop that comes from something like the seventh inning of Wednesday’s deciding game between the Blue Jays and Rangers.

These are the times when professional sports separates itself from all other forms of entertainment, because there is no script.

You could put an all All-Star team of Hollywood script writers into a room and still not produce a narrative that equals what happened organically between the Jays and Rangers.

The Encarnacion home run to tie it, Russell Martin’s lazy throw bouncing off of Shin Soo-Choo's hand, the umpires flubbing the rule and then getting it right, the indignation from the Blue Jays and their fans, the benches clearing, the series of Ranger errors that set the table for what is the greatest moment in Toronto baseball history since Joe Carter went deep off Mitch Williams 22 years ago.

It's the fact that we experience these things as one big, huge tribe, taking it all in from our various vantage points simultaneously, that makes memories like this last.

Think of the emotional range delivered in just the seventh inning alone – nervousness, anger, disappointment, rage, surprise, elation – all of it at extreme levels.

Then ask yourself what else in life delivers that kind of experience? An experience you can share directly with others, and indirectly with millions.

No movies, not television, not plays, not music.

Perhaps the end of a great war, but the price for experiencing that kind of jubilation is having to experience mass human tragedy first.

There are lots of things more important about our way of life in this country than sports. But the fact is it’s hard to bond over low crime rates, health care or quality education.

Which is why the most memorable moments shared by Canadians usually involve sports.

Jose Bautista isn't quite in that pantheon as a national moment. But for pure drama, it's about as good as it gets.

A shared moment, frozen in time.

A sports and cultural reference point to last a lifetime.