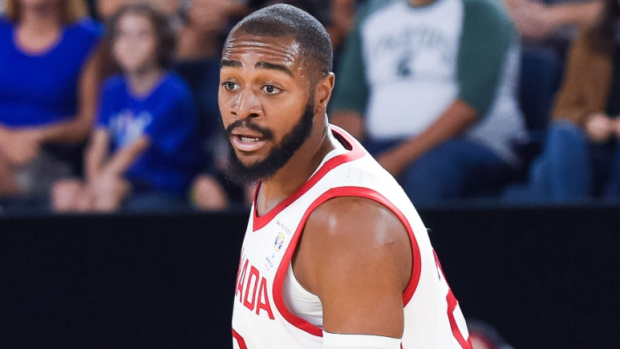 "It was a great team effort," said Best, a Scarborough, Ont., native and a product of Ryerson University. "Guys were sharing the ball, we were getting up and down and getting after it on defence. We stuck to the game plan and we were able to come up with a win."

The Canadians split a pair of friendlies last week with Australia, a team they'll face in their opening round of the World Cup on Sept. 1.

Canada set a blistering pace, opening with a 10-0 run and scoring seven three-pointers in the first quarter to take a 35-17 lead into the second. They had a 20-0 first-half run, and led 61-37 at halftime. Canada took a 92-63 lead into the fourth quarter.

Kaza Kajami-Keane had eight points before leaving the game with an apparent ankle injury in the second quarter.

"I think the team has been meshing really well the last couple of weeks," Nembhard said. "I think we're just bringing it all together."

Canada opened its pre-World Cup camp with three players with significant NBA experience but is down to just Orlando's Khem Birch. Miami Heat's Kelly Olynyk pulled out earlier this month after injuring his knee in an exhibition game with Nigeria. Sacramento Kings point guard Cory Joseph played in Canada's two exhibition games against Nigeria but didn't travel to Australia. He could rejoin the team for the World Cup.

The players with the team are simply focusing on the task at hand.

"Any time you play sports, the highest honour is to be able to represent your country and I'm blessed to be able to do it so far from home in beautiful Australia," Best said. "I'm just soaking it all up."

After Wednesday's game against New Zealand, the Canadians wrap up their pre-tournament schedule against the United States on Aug. 26.