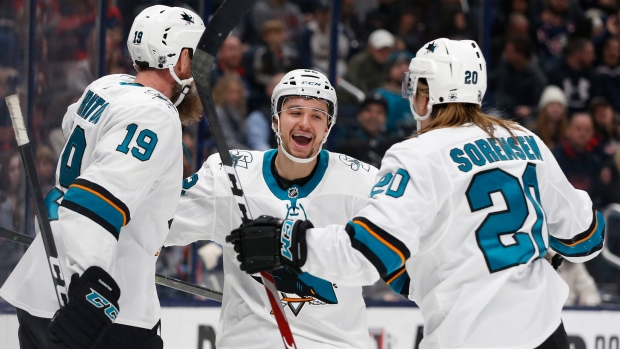 COLUMBUS, Ohio — San Jose’s win over Columbus snapped a 12-game point streak for the Blue Jackets. The Sharks hope it’s the makings of a hot streak of their own.

Aaron Dell stopped 21 shots to lift San Jose over Columbus 3-2 on Saturday after a 3-2 overtime win at Pittsburgh on Thursday night. The Sharks, in the midst of an East Coast road trip, are 3-1-1 in their past five.

Barclay Goodrow, Evander Kane and Kevin Labanc had the goals, and Dell held off the Blue Jackets after they scored a 6-on-5 goal late and were swarming for another one to tie it when time ran out.

“I just like the way we’re playing as a 20-man unit,” San Jose coach Bob Boughner said. “We’re all on the same page, we’re doing some good things, we’re managing our game. It’s a little bit more of a mature game, I think lately, and we’re giving ourselves a chance to win.”

The loss ended the impressive points streak (8-0-4) for the Blue Jackets, who have played well and gotten timely goals during the stretch despite the number of injured players reaching double figures.

Zach Werenski, who got his first hat trick on New Year’s Eve, had both goals for Columbus, and Elvis Merzlikins had 25 saves. Merzlikins had his first loss in three starts since starter Joonas Korpisalo was injured.

“We just couldn’t get the flow, the mojo going tonight at all,” Columbus defenceman Seth Jones said. “That’s mental and being physical on our part.”

After a scoreless first period, Goodrow got the Sharks on the board with his seventh goal of the season on a breakaway and shot that got between Merzlikin’s pads at 7:05 of the second. Werenski tied it less than two minutes later, lifting a shot from the right circle over the stick of defender Brenden Dillon and past Dell’s blocker.

Kane put the Sharks up 2-1 later in the second when he launched a high shot over Merzlikins’ shoulder to cap an odd-man rush that resulted because of a slow line change by the Blue Jackets.

Late in the third, Labanc beat a sprawling Merzlikins to make it 3-1. But 25 seconds later, after Columbus pulled the goalie to create a 6-on-5 advantage, Werenski got his second goal of the game and 13th of the season when he scored on a rebound. Still with a 6-on-5 advantage, the Blue Jackets couldn’t tie it.

“Our defensive play has been really good the past couple of games, and we’ve got to make sure we’re still doing that,” Labanc said.

NOTES: A first-period goal by San Jose’s Joel Kellman was waved off after a Blue Jackets challenge because the Sharks were offside on the odd-man rush across the line. ... D Dean Kukan was the latest Columbus player to be sidelined with an injury. He is out indefinitely with a cartilage tear in his left knee. Gabriel Carlsson replaced him in the lineup. ... The sellout was the third straight for Columbus. ... The Sharks are 14-0-1 when leading after two periods. ... Doug Wilson won his 700th game as Sharks' general manager.

Sharks: At Washington on Sunday.