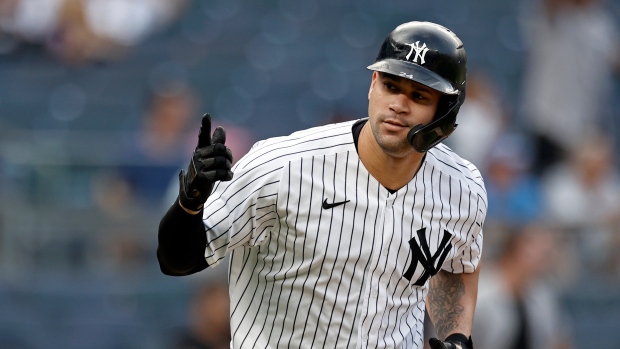 NEW YORK -- — Aaron Judge hit a tying three-run homer off Alex Colomé with two outs in the eighth inning, Gary Sánchez lined a winning single in the 10th, and the New York Yankees overcame a five-run deficit to beat the Minnesota Twins 6-5 Monday.

New York, its season spinning out of control in the last two weeks, won for just the fourth time in 16 games following a 13-game winning streak. It closed within a half-game of AL wild-card leaders Toronto and Boston with 18 games to play.

Gleyber Torres, who lost his shortstop job and was moved to second base, was the automatic runner on second under pandemic rules when Sánchez singled sharply with one out in the 10th off Ralph Garza Jr. (1-3). Torres scored standing up as the Yankees streamed out of the dugout.

Jorge Polanco and Miguel Sanó hit two-run homers in the first inning, and Byron Buxton added a solo homer for a 5-0 lead in the third off rookie Luis Gil.

DJ LeMahieu began the comeback with a sacrifice fly in the sixth that Max Kepler caught with a leap against the right-field wall. Joey Gallo hit his 33rd homer, his eighth with the Yankees, in the seventh off Tyler Duffey.

Judge, back in the lineup a day after leaving in the third against the Mets because of dizziness, sent a cutter to the opposite field in right for his 33rd homer. Catcher Ryan Jeffers set up low and away, and Colomé left the pitch up and in.

Clay Holmes (5-1) pitched the 10th after Aroldis Chapman (6-4) stranded two runners when he retired Polanco on a flyout in front of the center-field warning track, part of four scoreless innings by the Yankees bullpen.

New York ended a six-game home losing streak, its longest in a decade.

The Yankees finished 6-1 against Minnesota this year. The Twins are 32-109 against New York since 2002, including the postseason, and have lost 21 of their last 23 games in the Bronx. Minnesota has dropped four of five overall and at 63-81 is assured of not finishing with a winning record.

Yankees manager Aaron Boone announced a lineup shakeup before the game, moving Torres from the shortstop job he had held since the start of the 2020 back to second base. Tyler Wade started at shortstop and was replaced there in the ninth by Gio Urshela, who likely will take over the position starting Tuesday at Baltimore.

Gil, pitching against the team that traded him to the Yankees in March 2018 for outfielder Jake Cave, gave up five runs and seven hits in six innings.

Minnesota arrived for the makeup of an Aug. 22 rainout after a 5-3 home loss to Kansas City and headed back to Minneapolis for a series opener against Cleveland.

Polanco put the Twins ahead with his career-best 30th home run, driving a changeup on Gil’s seventh pitch for the first extra-base hit off the 23-year-old right-hander in his big league career.

Sanó homered on a fastball and Buxton went deep in the third, also on a fastball. His 11 homers are the most in a player’s first 21 games against the Yankees, three more than Prince Fielder from 2011-15 and Randal Grichuk from 2017-19.

Twins OF Brent Rooker was placed on the paternity list as his wife delivered a girl. Blair Evelyn Rooker was born at 4:10 a.m. CDT Monday, 7 pounds, 13 ounces and 20 inches long. ... RHP Kyle Barraclough was recalled from Triple-A St. Paul.

RHP Sal Romano was sent outright by the Yankees to Triple-A Scranton/Wilkes-Barre.

Twins: RHP Joe Ryan (1-1, 2.25 ERA) starts a doubleheader opener at home against Cleveland after retiring his first 19 batters and pitching seven shutout innings at the Indians last week. LHP Charlie Barnes will be recalled to start the second game.