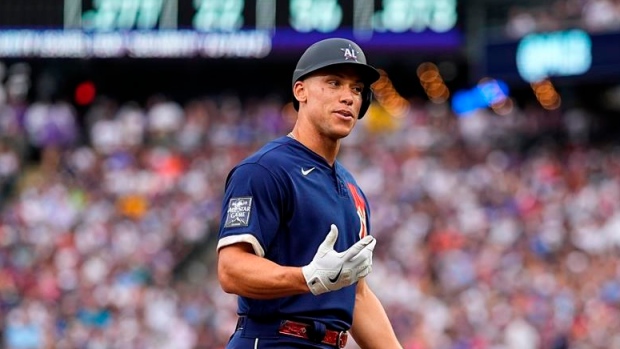 “It's huge, obviously,” Boone said of Judge's return. “Really excited to have him back. Has been feeling really strong the last few days."

The Yankees started Tuesday 9 1/2 games behind AL East-leading Boston and eight back of the second-place Rays.

First baseman Luke Voit, on the IL with left knee inflammation, took batting practice and defensive drills. He is expected back in the next couple days.

“I would say he's very close,” Boone said. “We'll have a decision here in the next day or two.”

Outfielder Clint Frazier, out since July 1 with vertigo, is undergoing neurological tests in Michigan. There may be an update on his status Wednesday,

“It's a whole battery of neurological testing where he's hitting and throwing and doing all these things,” Boone said. “I think there's some vision things that they're trying to work through. How he responds to different things.”

Right-hander Luis Severino, coming back from Tommy John surgery, will start a minor league rehab assignment or throw in a simulated game later this week.

Righty Michael King (right middle finger) saw a hand specialist and will not throw for another week. He was transferred from the 15- to the 60-day IL.

Reliever Clay Holmes, acquired from Pittsburgh on Monday, was added to the roster.

Minor league right-hander Yoendrys Gómez was placed on the COVID-19 injured list to open up a 40-man roster spot. He is with Class A Tampa.