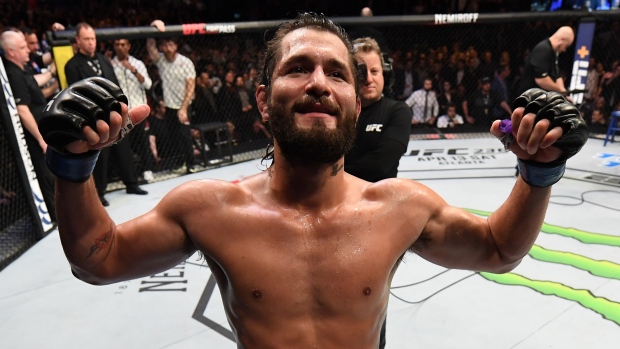 Before the location of UFC 249 could even be revealed, the main event fight between lightweight champion Khabib Nurmagomedov and No. 1 contender Tony Ferguson was put in doubt when the title holder announced on social media that he is stuck in Russia due to the COVID-19 pandemic.

While nothing has been officially announced by the promotion, one of the fights that’s been floated as a possible replacement would see welterweight champion Kamaru Usman face Jorge Masvidal, the holder of the BMF belt.

The pair have had a contentious back and forth on social media, with the champion claiming that when it came time to actually accept the fight, Masvidal could not be found and was not willing to step into the Octagon on April 18.

He provided updates on Jorge Masvidal, Tyron Woodley, Jair Rozenstruik and much more...

Thanks to those who tuned in and if you didn't, catch the replay below. https://t.co/oQzOBMc85N

Masvidal’s manager Abe Kawa participated in a Q & A with TSN’s Aaron Bronsteter on Tuesday and refuted Usman’s claims that his fighter was not interested in the bout.

“We were offered the Usman fight on Friday, we accepted on Friday,” Kawa told Bronsteter. “Specifically, from my mouth, I was with Jorge on Friday and we were talking about this fight, I looked him dead smack in the eyes and I said are we doing it and he said, we’re doing it. Much later in the day it became, are we taking the fight or not taking the fight to the UFC.”

Usman paints a different picture. On Instagram Live on Monday, the champion said that Masvidal was just looking for free publicity when he threw his name out to join the prospective April 18 card.

“Today, the news breaks, the first thing these guys do, jump on Twitter, try to clout chase, try to get fans on their side ‘oh I’m free April 18.’ No, you’re not free,” Usman said on Instagram Live. “If you’re free, call Dana White right now.”

Kawa is puzzled both by the perception that Masvidal wouldn’t want to accept a fight that he has pushed for publicly as well as the champion’s plan if he is in fact trying to build to a bout.

“I think we have openly said we wanted the Usman fight, Jorge from his own mouth has stated, if all things are equal, in other words if all paycheques are the same, I want Usman, that’s the guy I want, he’s the one we’re going to go get,” said Kawa. “I don’t know where or when the idea that Jorge didn’t want to fight, it’s crazy to me because the last time I checked, Usman was the one that said ‘who?’ when they brought up Jorge. He started bringing up every other guy in the top 10, outside of Jorge. So it’s confusing, it’s weird and I don’t know the strategy.”

For his part, Kawa believes that Dana White will make the UFC 249 PPV happen and might just be keeping all of his cards close to the vest on both fights and location.

“Dana’s going to get this thing done, kudos to him, he’s knows what he’s doing and I think he’s smart enough to know it’s better to have less information out there in terms of where it’s at than not, because the one thing he probably doesn’t want to have happen is anyone shutting it down or going out and if he can make this thing happen for the fighters sake, god bless him and I’m all for it.”​