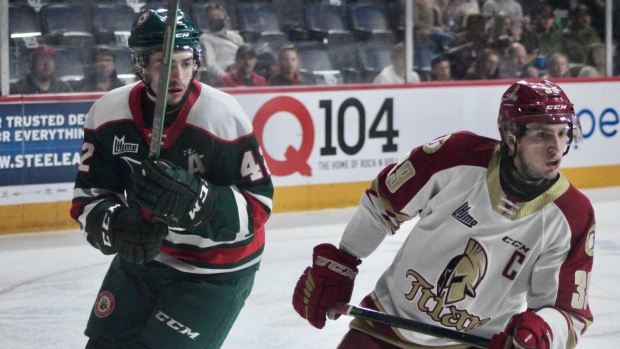 HALIFAX — Riley Kidney scored at 16:14 of the third overtime period as the Acadie-Bathurst Titan managed to force a fifth and deciding game in their first-round QMJHL playoff series with the Halifax Mooseheads with a 4-3 win Wednesday.

Halifax netminder Mathis Rousseau made 68 saves in the loss.

Hendrix Lapierre had three points with a goal and two assists for the Titan.

The Mooseheads jumped out to a 2-0 lead with a pair of goals from Mathieu Cataford and Markus Vidicek spread 40 seconds apart just over five minutes into the second period.

Acadie-Bathurst would respond, however, with Cole Huckins scoring at the 9:59 mark of the frame, followed by Lapierre at 13:45.

In the third period, Cole Larkin scored at 10:18 to give the Titan a 3-2 lead, but it wouldn't last, as just a little more than two minutes later Cataford potted his second goal of the evening for Halifax to tie the game up, where it would remain until Kidney finally broke Rousseau late in the third overtime.

The Titan outshot the Mooseheads 72-46 and 37-22 in the three extra periods alone.

Game 5 will play Thursday in Bathurst, N.B., as the Titan look to complete the comeback after going down 2-0 to begin this series.