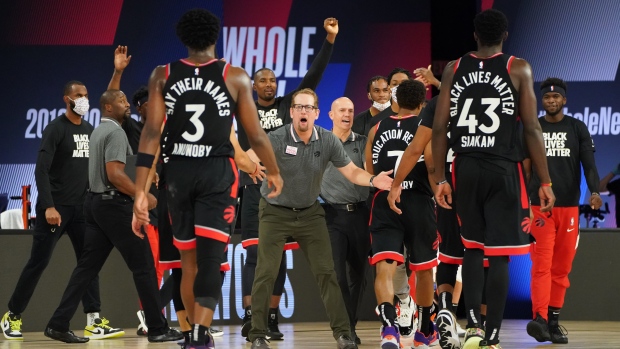 TORONTO – After weeks of negotiation and a little bit of posturing on both sides, the NBA and its players’ association filled several key dates into the basketball calendar on Monday night, and those dates are coming at us faster than ever.

In a typical off-season, there are more than three months between the draft in late June and the start of training camps in early October – giving teams plenty of time to build their rosters, and players a much-needed opportunity to rest their bodies and minds, work on their games, and gear up for the next season.

This year, all of that will have to be condensed into an accelerated one-month timeframe.

With the league continuing to adapt its operations around the ongoing COVID-19 pandemic, only 34 days will separate next Wednesday’s draft from the start of the 2020-21 campaign on Dec. 22, with free agency (which opens at 6:00 p.m. on Nov. 20, with teams able to make signings official a couple days later) and training camp (which begins Dec. 1) in between. The moratorium on trading is expected to be lifted in advance of Nov. 18.

This isn’t anybody’s idea of an optimal off-season – many players favoured a January, or even February start – but an expedited schedule was deemed necessary to maximize the number of games they can play (72) and minimize revenue loss throughout the association.

The result will be a busy month for all 30 clubs, but it should be especially eventful for the Toronto Raptors, who have a lot to figure out and get done in a very tight window.

The Raptors own two picks (29 and 59) in the upcoming draft and they’ll have three prominent players (Fred VanVleet, Serge Ibaka and Marc Gasol) hit the open market a couple days later. As they prepare to construct their roster for next season and beyond, the question that’s hanging over their heads – unique to them as Canada’s only NBA team – is; where will they host training camp in three weeks and ultimately play their games?

As TSN reported last month, and according to multiple sources, the team has been and remains hopeful that they’ll be able to play some, if not all of next season’s home games at Scotiabank Arena in Toronto.

But while that’s undoubtedly the preferred scenario, there’s still too much uncertainty to view it as a likely scenario. With the border between Canada and the United States closed for non-essential travel and cases continuing to rise in Ontario and throughout both countries, getting government approval to have teams make regular trips back and forth without quarantining could prove to be a challenge.

In case playing games at home isn’t possible to start the season, the Raptors have looked into several potential contingency locations – including Newark, Nashville and Tampa Bay, among others. However, they don’t have a locked and loaded Plan B. They believe it’s too early to give up on their very clear Plan A – hosting teams north of the border.

The clock is ticking, though, and time is not on their side. If they don’t get the green light over the coming week – or two, at most – they’ll have no choice but to pivot and find a temporary home stateside.

All the while, the NBA calendar is moving along at light speed.

This year’s draft will be held virtually after a restrictive pre-draft process prevented teams from conducting in-person workouts with the prospects. It’ll be uncharted territory for the Raptors, and for everybody else, as will free agency and trade season. These next few weeks will test their preparation and ability to adapt on the fly – qualities that Toronto’s front office prides itself on.

They’ve had more than a year to scout for this draft and should have a pretty good idea of who they like, but thanks to a balanced class of prospects and the unusual workout process that preceded it, nobody is quite sure how the night will play out.

Likewise, they’ve had more than enough time to prepare for free agency. They’ve crunched the numbers – the salary cap ($109.14 million) and tax line ($132.63 million) came in as expected – and know how much they can spend on their guys without dipping into their coveted 2021 cap space. They’ve anticipated what the market might look like, which teams could have interest in their players, and how much those teams can offer.

But what if the market throws them a curveball? Will Giannis Antetokounmpo’s league-altering decision – he can sign a supermax extension with Milwaukee once free agency opens – impact the way they conduct their business? Can they even afford to wait it out, given how fast things could move this year?

And what will they decide to do in regards to Terence Davis, who was arrested late last month and is facing seven charges, including two counts of assault for allegedly hitting his girlfriend in the face.

Per NBA rules, incidents of domestic violence are investigated, addressed and managed by the league. However, Davis’ contract status allows for the Raptors to make their own decision on the guard’s future with the team, independent of the league’s ruling, if they choose to do so.

The second and final year of Davis’ deal will become fully guaranteed when free agency opens later this month, but they can waive him prior to that date without incurring a financial penalty. Given the severity of the charges and how hard the organization has worked to build and maintain a strong culture, moving on from Davis is a very conceivable scenario, in spite of his standout rookie season.

Training camp is fast approaching, with the start of the season not far behind, and the Raptors have plenty of work to do and big decisions to make. That should result in an interesting, albeit abbreviated, off-season.​