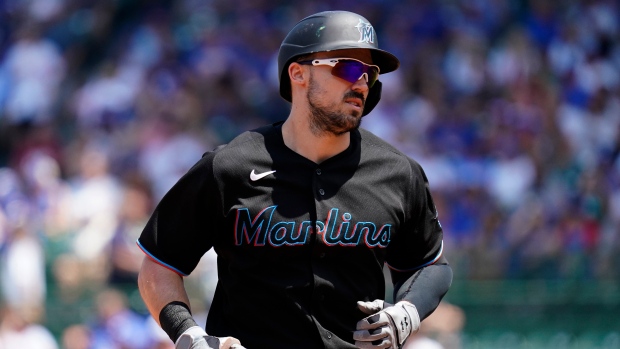 CHICAGO (AP) — Adam Duvall is open to participating in the Home Run Derby if Major League Baseball wants him. The way he's knocking them out, he's making a case to be included.

The Marlins have outscored the NL Central leaders 21-3 through the first two games and put themselves in position to sweep their first series since winning both wild-card games against Chicago last fall.

No one's been a tougher out the past two games than Duvall.

He remained locked in after hitting a grand slam and two-run drive in Friday’s 10-2 romp, hitting two-run shots in the first and third against Jake Arrieta (5-8). Duvall joined Derrek Lee in 2002 and Giancarlo Stanton in 2016 as the only Marlins with back-to-back multi-homer games.

“I've had some pretty good stretches in my career,” said Duvall, an All-Star with Cincinnati in 2016. “Obviously, the swing and the bat's coming through the zone the right way right now. But it's a combination of getting good pitches to hit and then having that swing to match.”

The only hit López (3-4) allowed was a single to shallow left by Eric Sogard in the second inning. The right-hander struck out seven and walked none with his late dad on his mind. Father's Day on Sunday will be the first since Danny López died last July.

“This game today had a lot of meaning for me, with Father's Day coming tomorrow,” he said. “I just hope he's as happy as I am with how everything went today.”

Chicago’s Jason Heyward hit a solo homer in the eighth against Anthony Bass.

Duvall made it 3-0 in the first when he followed Jesús Aguilar’s RBI groundout with a two-run shot, driving an 0-2 sinker the opposite way to right.

The Marlins added a run in the second when Jorge Alfaro singled and scored on Jon Berti's sacrifice fly.

Duvall extended the lead to 6-0 in the third with another two-run shot, launching one halfway up the bleachers in left-center for his 16th home run. That gave him three multi-homer games this season and 10 in his career.

“The stuff was as good as it's been in a long time,” Arrieta said. “The first homer that Duvall hit, 0-2 pitch, it was actually a really nice sinker off the plate.”

Duvall's second homer, on a hanging 1-2 curve? That was a mistake.

“Not good enough, obviously,” Arrieta said. “Not what I intended to have happen today.”

The Cubs had not allowed 10 or more runs in back-to-back games at Wrigley Field since Aug. 18 and 19, 2015 against Detroit. They allowed one to score when a pop fly dropped between the mound and plate for a single and another on a wild pitch in losing for the fifth time in six games.

Cubs: RHP Adbert Alzolay (blister on right middle finger) is scheduled to start Monday against Cleveland after being sidelined since June 7. “It's a big piece we've been missing,” manager David Ross said. “He's been one of the guys that have really given us ... consistent starting pitching, with real swing-and-miss. Has been a real asset to our rotation this year.” ... RHP Trevor Williams (appendectomy) threw a bullpen session Saturday and LHP Justin Steele (right hamstring strain) is scheduled to throw one on Sunday.

The weekend series winds down, with RHP Alec Mills (2-1, 6.11 ERA) pitching for Chicago and rookie RHP Zach Thompson (1-1, 2.25) makes his third start for Miami. Mills lost to the New York Mets on Tuesday. Thompson went five scoreless innings in a win over Atlanta on June 12.