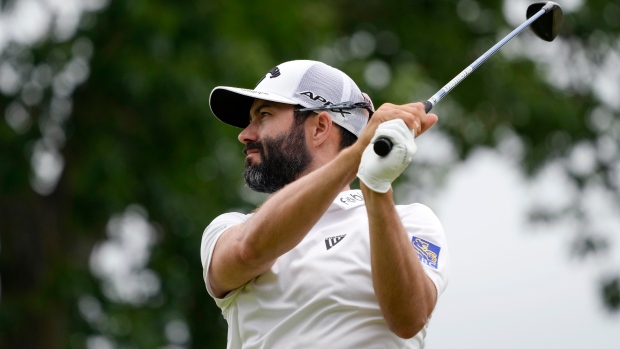 Two years ago when Adam Hadwin decided to make an overhaul to his golf swing, one of the improvements he was after was his play in the wind. He lacked that piercing ball flight that would cut through the breezes instead of being at the mercy of it.

Those alterations paid off on Saturday in the third round of the U.S. Open as the Canadian used that swing as well as a deft putting touch and an overall gritty game to produce a round of 70, one of only 11 rounds of par or better in exceptionally difficult conditions. As a result, he finds himself two back of the lead and with a legitimate shot to win a major on Sunday.

“Just kind of a scrappy round,” said Hadwin after closing out his day with a par on 18. “Hit a lot of good quality golf shots. Felt like I left a couple out there early on, and then just kind of kept fighting through. Just kept hitting decent golf shot after decent golf shot. Made some nice sort of three- to six-footers on the back to kind of keep things going.”

With gusts up to 35 kilometres and temperatures hovering around 14 degrees, it felt more like an early winter day in Abbotsford, B.C., than June in Boston. Coupled with a hard and fast course, scores soared as players tried to navigate the challenge provided by The Country Club layout. The conditions took a toll on some notable players. Third-round co-leaders Collin Morikawa and Joel Dahman, who shot 77 and 74 respectively, were among the. many to fall off the pace.

Hadwin began his day with bogeys on two and four, before getting one back on the par-3 sixth where he drained a 16-foot putt.

On the par-5 14th his drive hit a tree limb up the left side of the fairway forcing him to lay up on his second shot. His third came to rest in some gnarly rough to the left of the green and it appeared he was on his way to another bogey. But a clutch chip rolled across the putting surface and fell into the cup for a birdie. After a bogey at 15, he added a final birdie on the 17th hole.

He admitted that he peaked at the leaderboard over the last four or five holes and, seeing that he was up among the leaders, he felt some nerves for the first time. But those slipped away once he signed his scorecard. Instead, there was the adrenaline of being in the hunt.

“It feels good now,” said Hadwin. “At times out there it didn’t feel that great but I knew things were going to be a little firmer, a little quicker and those pins were going to be in some different spots than the first two days. I knew I was going to have to keep hitting good shots and fighting my way through the round.”

Hadwin hit half his fairways and the same margin of greens in regulation, both decent numbers considering the wind. He used just 27 putts on the day, many of them from the knee-knocker range for par, usually after a good chip from the rough.

“It was difficult,” he said of the conditions. “Especially when the margin for error is so thin. You want to leave yourself in certain spots on the greens but rarely are you ever going to have a perfect shot into the wind or downwind to do that. A lot of it is just guessing, that’s what we do. Thankfully we do it better at times than at others.”

Now Hadwin is in a similar position as Mackenzie Hughes was in last year’s Open, with a shot to become the second Canadian male to win a major title. Hughes had a share of the 54-hole lead last year before ending up tied for 15th.

No one outside of the top 100 in the world ranking has ever won the U.S. Open. Hadwin sits in 105th spot on that list and will try to become the first. But there is a strong contingent of players also looking to claim the trophy on Sunday.

Ahead of Hadwin are Will Zalatoris and Matt Fitzpatrick at four under with defending champion Jon Rahm a shot back of that duo. Hadwin shares four place with Keegan Bradley and Scottie Scheffler, the No.-1 ranked golfer in the world.

“There’s still lots of golf to be played,” Hadwin said. “There’s no letup on this golf course. I imagine the conditions are going to be very similar tomorrow so I’m going to have to play a really good round of golf.”

The weather isn’t forecast to improve much on Sunday. In fact the temperatures are expected to be slightly cooler and the wind somewhat stronger not long after the leaders tee off. That will mean plenty of patience on the course as well as commitment to club selection.

Hadwin will play alongside Scheffler in the third-to-last group teeing off at 2:23 ET.