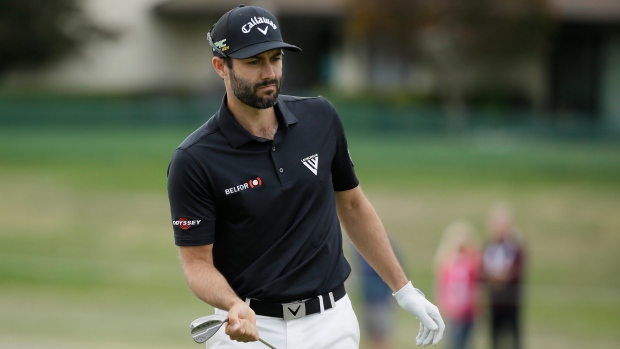 Adam Hadwin has been preparing as best he can to help the underdog International team at this week’s Presidents Cup. But there’s one thing that he simply can’t plan for and that’s a potential matchup with Tiger Woods.

“I’m sure it would make me poop myself and I’m sure it would jack me up,” said Hadwin of a possible matchup with the 15-time major winner who will serve as a playing captain for the American side.

Of course that potential match is a long way off and may not even come to be. Even so, there are still 11 other heavyweights on the American team to worry about.

Hadwin is hoping he can play a part in ending the lopsided record of the biennial event, which has seen the U.S. side win 10 of the 12 editions – including the last seven. Just before heading to Australia, he pronounced his game ready to go.

“I feel good, not too dissimilar to how I felt the last few months,” he said. “I think my game is in a good spot in order to contribute to the team.”

Hadwin was one of four captain’s picks made by Ernie Els in November. A consistent 2018-19 season followed by a hot start to the new PGA Tour season made him a good addition to the International side. The fact that he’s one of the game’s best putters and that he played on the team two years ago also didn’t hurt his chances on a squad loaded with rookies.

“Playing in the second one now, I know a little bit more about what to expect and how to use my time and how I can get best prepared,” said Hadwin, who went 0-2-1 at the 2017 edition. “I think it’s not all about you anymore. Yes we have to prepare as an individual and yes we have to prepare at the highest level, but there’s 11 others who are doing the same thing.

“Also time management during the week is a little crazy because of all the extra stuff, the media stuff, the big gala on Tuesday night. You have to use your energy wisely.”

Hadwin said he and his teammates will be taking a crash course on the hard and fast layout at Royal Melbourne. There are certain shots he’ll need to play on the sand belt course that don’t come up that frequently on the PGA Tour.

However, he can get plenty of advice from Aussie teammates such as Adam Scott, Marc Leishman and Cameron Smith. Captain’s Assistant Geoff Ogilvy also grew up at the course and will be a wealth of knowledge.

There is also the adjustment to the formats, which can require different strategies and shot selections. In Foursomes play, also known as alternate shot, there is even a possible adjustment needed to different golf balls based on each player’s preference. That, said Hadwin, can be somewhat overblown.

“Two years ago, I was super concerned about the golf ball,” stated Hadwin, who plays a Callaway Chrome Star Soft, “and I thought it was a massive deal. But having played with Nick [Taylor] at last year’s World Cup, we couldn’t have been using golf balls that were further apart, and we did quite well (they finished T4). So the golf ball has since become so much less of a concern for me, which is great. When I was going to hit the iron shot, he hit my ball off the tee and vice versa, and it worked out perfectly. With the driver, the ball is just not that dissimilar.”

While he wouldn’t reveal who his potential partners are, the Abbotsford, B.C., product said that Els has told the players the lineup and the formats in which they’re likely to play. That’s allowed them all to get prepared prior to their arrival Down Under and manage issues such as the golf ball.

Last time, Hadwin played a Four-ball match with Hideki Matsuyama and a Foursomes match alongside Adam Scott. Both are potential partners again this time.

“I think Ernie has done a really good job of bringing us together as a team, more often, sooner,” he stated. “There isn’t this sense of you show up Wednesday afternoon and ‘Alright you’re going to play with so-and-so.’ It’s more like, ‘This is what I’m looking at, these are the guys you might be playing with this week and in this format. So if you need to discuss golf balls or whatever, I’m giving you guys enough notice here that you can figure it out.’”

One of the more familiar faces in the International team room for Hadwin is fellow Canadian Mike Weir, who is serving his second stint as a Captain’s Assistant and likely being groomed as a future captain. Weir played in five Presidents Cups and has a wealth of experience that Hadwin tapped into last time.

As with last time, Hadwin said he’ll reach out to Weir for help with handling his emotions that will come in certain situations during the competition.

Because of their friendship, which solidified at the 2017 Presidents Cup, Hadwin knows he can rely on Weir for any assistance needed.

To be sure, the International team will once again be in tough. There are 10 American golfers ranked higher in the world rankings than the top International, Scott. In fact, the Internationals haven’t even held a lead after any session since 2005. The domination has given the event more of a feeling of an exhibition than a grudge match.

After getting thumped at Liberty National two years ago, Hadwin made getting back on the team a priority, if for no reason that to try and avenge the loss.

“It stung, I won’t lie,” he said. “We all want to try and win it and hopefully this time with the home crowd on our side we can do it.”