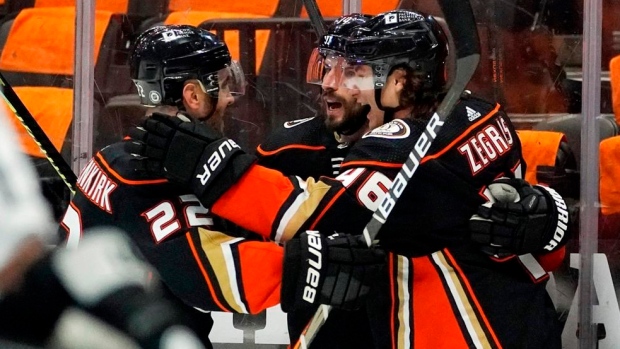 ANAHEIM, Calif. — The Anaheim Ducks are no strangers to one-goal games this season. Now they are starting to win them.

“It is good to get the two points. We are starting to build the belief that we can get on the other side of one-goal games,” Anaheim coach Dallas Eakins said. “This isn’t easy. We are a team in transition. The way you handle adversity is important.”

Henrique took a pass from Trevor Zegras and put the puck past Cal Petersen inside the near post for his sixth career overtime goal, giving the Ducks consecutive wins for only the second time this season. They have won both games in this season's Freeway Face-Off.

Rickard Rakell had two goals and an assist, becoming the fourth Anaheim player in 10 years to have three or more points in consecutive games.

The Swedish forward struggled early in the season, but has a point in six straight games, with five goals and seven assists.

“I don’t think I’m doing anything different than maybe taking a little bit of extra time to decide where to go or put the puck,” Rakell said. “I don’t know what is clicking specifically, but things feel good going in.”

Rakell gave the Ducks a 2-1 lead late in the first period when he put a wrist shot top corner inside the near post. He extended Anaheim's lead to 5-3 late in the second with a backhand after taking a great spinorama pass from Max Comtois, who had a career-high three assists.

Adrian Kempe had his second NHL hat trick for Los Angeles. His redirect in front with 2:32 remaining in the third period sent the game to overtime.

“We are a good team coming from behind but we have to learn to have a good start and need to start playing with the lead,” said Kempe, the first LA player to have a hat trick against Anaheim.

Kempe tied it at 1 midway through the first period after taking a centring pass behind the net from Blake Lizotte. Kempe added a power-play goal with 3:32 remaining in the second to bring the Kings to 4-3.

Dustin Brown and Andreas Athanasiou also scored for the Kings, and Petersen made 19 saves.

“Tonight we’re really disappointed by the mistakes,” coach Todd McLellan said. “I just thought we were really, really sloppy. We had way too many individual mistakes, the turnovers off our tape and the lackadaisical play.”

Shattenkirk opened the scoring 2:45 in with a wrist shot inside the far post. The defenceman didn’t have a goal in his first 24 games this season but has now scored in two straight.

Los Angeles defenceman Drew Doughty had two assists to reach 400 in his career. His 400 assists since his NHL debut in 2008-09 rank seventh among NHL defencemen.

The Kings converted on the power play for the fifth straight game with goals by Brown and Kempe. Los Angeles is 7 for 19 with the man advantage during that stretch.

Anze Kopitar had a pair of assists on the power play. With 18 power-play points, he is tied with Edmonton star Connor McDavid for the league lead. Brown has seven power-play goals, tied for second in the NHL.

Kopitar has a point in five straight games, with two goals and seven assists.

Terry (upper body) and Anaheim defenceman Josh Manson (lower body) were injured during the game and did not return.

Los Angeles goaltender Jonathan Quick was scratched from the lineup with an upper-body injury after not taking part in the morning skate.

McLellan said Quick is day to day and the injury happened late in Saturday's 4-3 overtime win against the St. Louis Blues.

The teams meet again Wednesday night in Anaheim. Then the Ducks and Kings won't face each other until April 20, when they will play five times in 11 days.