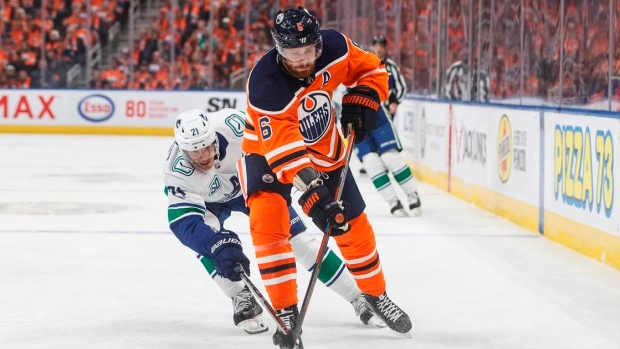 "Lots of activity in recent days on this, and several contract options still in play," Rishaug tweeted.

Adam Larsson is considering the Oilers most recent offer, as negotiations between the two sides continue. Lots of activity in recent days on this, and several contract options are still in play.

"I'm not pretty confident, but I'm not not confident," Oilers general manager Ken Holland said of being able to re-sign Larsson earlier this week.

Daniel Nugent-Bowman of The Athletic reported earlier in July that Larsson's agent, J.P. Barry is seeking some term on Larsson's next deal.

"We're making progress on a contract. We just need to talk [more]," Barry said via Nugent-Bowman. "Sometimes teams like to move quicker than player. He's just thinking about everything. We're getting there. There are a few things we can still discuss."

Earlier this week, the Oilers acquired veteran defenceman Duncan Keith from the Chicago Blackhawks in exchange for blueliner Caleb Jones and a third-round pick. The trade leaves the Oilers with just over $11.5 million in cap space this off-season with 19 players under contract, per CapFriendly, and Holland said the team continues to discuss bringing back Larsson. Holland added that while money is set aside for the deal, "it's Adam's decision."

Larsson has spent the last five seasons of his career in Edmonton since coming over from the Devils in a one-for-one trade with Taylor Hall heading back to New Jersey in the summer of 2016. The 28-year-old Larsson posted four goals and six assists while appearing in all 56 games last season. For his career, Larsson has 25 goals and 112 assists in 703 regular season games spread out across 10 NHL seasons.

The Skelleftea, Sweden native is coming off a six-year, $25 million deal he signed with the Devils in July of 2015. That deal carried a cap hit of $4.16 million.