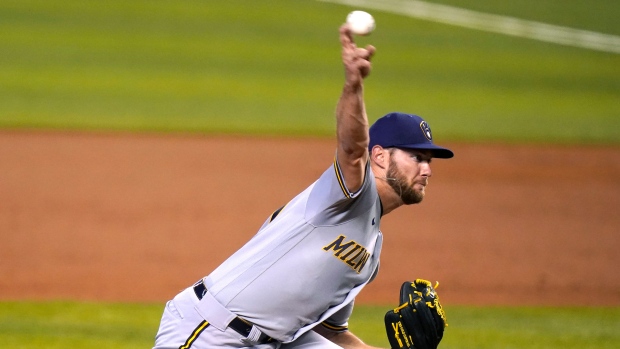 MIAMI — Adrian Houser brought the heat on the mound and kept his cool circling the bases.

The veteran right-hander struck out 10 in six innings and homered off Daniel Castano for the second time this season, helping the Milwaukee Brewers snap a six-game losing streak by beating Miami 6-2 Saturday.

Houser's homer in the fourth raised his career average to .121 (4 for 33). He also homered against Castano when he beat Miami on April 27, and this time he didn't want to let his excitement show.

“I was trying to keep the heart rate down and trying not to be as emotional as last time, trying to stay even keel and not have to catch my breath when I was going back out to the mound,” Houser said.

He's the first pitcher to homer off the same pitcher in separate games in the same season since Bronson Arroyo did it against off Glendon Rusch in 2006.

Avisaíl García added his fourth home run for the Brewers, who improved to 1-5 on their seven-game trip. The losing streak was their longest since July 2018, and began when they led the NL Central.

“A big win,” Houser said. “We really needed it. Hopefully we can keep it going and get back to where we were.”

Miami had won four in a row. Marlins batters struck out 18 times and totalled only six hits.

Houser (3-3) allowed two runs while matching a career high in strikeouts. He became the 17th pitcher since 1900 to hit a home run, walk none and have at least 10 strikeouts in a game, and he's the first Brewer to accomplish the feat.

“A great start from Adrian,” manager Craig Counsell said. “He was as good as we’ve seen.”

Although Houser was dominant, Miguel Rojas homered on his first pitch.

“Somehow Houser runs into another one,” Castano said.

“Completely unexpected,” Counsell said, “but it got the dugout fired up.”

Josh Hader, Milwaukee’s fourth pitcher, became the fastest to 400 strikeouts in major league history. He pitched around a single in the ninth and had three strikeouts to increase his career total to 402.

Afterward, Hader grinned as he held up a game ball.

“This is a special ball. It’s going to be going in the man cave,” he said. “There are a lot of guys who have played this game who are really great and I grew up watching. To break a record like that, it’s pretty special.”

Hader has 234 2/3 career innings pitched. The previous record was 236 by Craig Kimbrel.

Marlins manager Don Mattingly, outspoken in his dislike of baseball's trend toward less contact, isn't surprised there have been four no-hitters already this season.

“There should be one every week, right?” he said. “We’ve built teams on the three-run homer or strikeout or walk, with not a lot of hits in between.”

Brewers: Tyrone Taylor was hit on the left hand by a pitch in the fifth but stayed in the game. ... RHP Corbin Burnes, sidelined for an undisclosed reason, is expected to throw a bullpen Monday and be activated next week.

Marlins: LHP Richard Bleier was hit on the leg by a comebacker but stayed in the game. ... Rehab assignments are expected for INF Jazz Chisholm (hamstring) and C Jorge Alfaro (hamstring).

Marlins: Castano was recalled from Triple-A Jacksonville to make the start, and Miami optioned INF Jose Devers to Jacksonville.

LHP Brett Anderson (2-2, 4.15), who has been sidelined with a strained right hamstring, is expected to start Sunday for the Brewers against RHP Sandy Alcantara (1-2, 2.95). Alcantara earned his lone win of the season April 28 at Milwaukee, allowing two runs in seven innings.