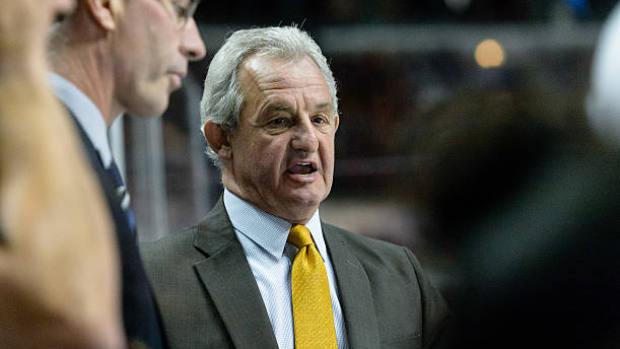 Those are the words most frequently associated with recently rehired Calgary Flames head coach Darryl Sutter.

In 2002, he was hired by the Flames and coached a roster that included No. 1 centre Craig Conroy (now the team’s assistant general manager), top blueliner Toni Lydman and backup goaltender turned TSN analyst Jamie McLennan. It also featured a 25-year-old Jarome Iginla.

Nineteen years later, Sutter is tasked with guiding a new group – led by Sean Monahan, Johnny Gaudreau, Mark Giordano, Matthew Tkachuk and Jacob Markstrom – back to postseason glory, or “unfinished business” as he dubbed it at his introductory press conference last week. He is the Flames’ fifth head coach in six seasons after Geoff Ward was fired by general manager Brad Treliving last Thursday.

The 11-12-3 Flames sit in second-last place in the North Division, four points out of a playoff spot after losing two straight games. They had their first practice under Sutter on Tuesday, a session that included a bag skate.

So what do players who were previously coached by Sutter think is in store for this group of Flames?

We reached out to Jeff Shantz, Mike Ricci, Andrew Ference and Robyn Regehr – one player from each of Sutter’s coaching stops in Chicago, San Jose, Calgary and Los Angeles – for their insights ahead of Sutter’s first game, in his second stint behind the Flames bench, Thursday against the Montreal Canadiens.

Describe Darryl Sutter as a person and as a coach:

“I had Darryl when I was first out of junior. Basically, I don’t think I play if he wasn’t the coach. He is a very tough person, but very fair. A lot of coaches (in my mind) fall into the trap of being hard on the players that you can be, and not hard on the ones that you feel are the top players. I really appreciated (looking back) that Darryl was actually just as hard, or sometimes even harder, on the players who received more ice. I knew, as a fourth liner starting out, that if I was having a good game, he would find ways to get me on the ice more when a top player wasn’t performing well. I had a lot of other coaches who would let the top-six forwards do what they wanted and when things went poorly, the bottom guys were the ones who got the brunt of their frustration.”

“He’s intense, and he’s all about winning hockey games. Even off the ice, he’s a good dude. He really cares about his players. If you work hard, you won’t have a problem with him, that’s for sure.

“He’s very smart and incredibly competitive and the type of person you better be able to back up your talk, too.”

“I think Darryl Sutter has three loves in his life: his family, their ranch and winning hockey games. He is a coach that demands his players and team play to a specific identity. Examples of this team identity will be that they will be hard to play against (winning puck and physical battles), being a great puck-possession team (top-3), and having a great penalty kill (top-5), and having a decent power play (top-10-to-15).  If a player can do this, he will be fine and probably part of a successful team. If a player will not commit to doing this, they will be held accountable and be uncomfortable.”

“One game in Anaheim, he called a timeout halfway through the third period and told us that if we didn’t want to play the way he wanted us to, that he was done coaching. He never said a word the rest of the game. I remember thinking to myself that I just might get an extra shift or two!”

“In San Jose, we were always battling for that last playoff spot. He’d spent the whole morning writing everything and all the games we had to play. I remember him looking up at us and saying, ‘Tell your wives and tell your families that you’re not gonna see them a lot, we’ve got to focus.’ He had us playing playoff hockey with like 45, 50 games left in the season and it put us in the right frame of mind. It was kind of funny, we were all like, ‘We’ve got to play playoff hockey for the next 50 games.’ The one thing about Darryl is he wants to win hockey games. If you play hard, it doesn’t matter. If you’re a third-line guy, he’ll put you out on the power play. He gives opportunity to whoever he thinks deserves it.”

“After we lost to Tampa in Game 7 (in the 2004 Stanley Cup Final), I was a hot mess and crying in the locker room. He was the guy that went around and gave some comfort to us and let me know that it hurts so bad because we care so much and that we had nothing to be ashamed of because we literally gave everything we could. He can be a hard-ass, but this is him at his core. He cares deeply about those around him.”

“There are too many Sutter stories to share. But he gave Bill Ranford a hard time in front of the team once in L.A. during a meeting for having his hands in his pockets. I decided to come into the practice rink early the next day and put my sewing skills I had learned in Ms. Spence’s Grade 8 home economics class to work. I went to the trainers and asked for an identical set of track pants Darryl wore and proceeded to sew both pockets shut. Then I snuck into his office and swapped his pants with the ones I had sewn. Darryl spent the first 30 minutes of the morning after arriving trying to figure out why he couldn't put his own hands in his pockets, and I got a good laugh.”

What advice do you have for Flames players as Sutter takes over?

“The best advice I can give would be to show up to work and compete each day. Be honest with yourself and with your compete level. If you come to work for the team and are honest about it, he’ll love you. If you come to just take care of yourself, you will have issues with him.”

“Play hard. That’s about it. I remember one time being on the wrong side of a benching for taking a bad penalty, but after that I don’t think I’d ever played so much. I’d just tell them to play hard and play to win. Darryl’s all about the team and if you do that, you’ll definitely not have a problem with him.”

“My advice would be to make sure players take their preparation for games seriously. Also, they should be ready to be held accountable if they have a bad game or aren't performing. It's pretty simple. If Darryl believes a player has bought in and [is] committed to being part of the team identity they want to create, it will be fine. If that player does not want to commit or is inconsistent or selfish, they will have a hard time.”

“You are what you do, not what you say. And make sure your first shift of the game is a banger.”