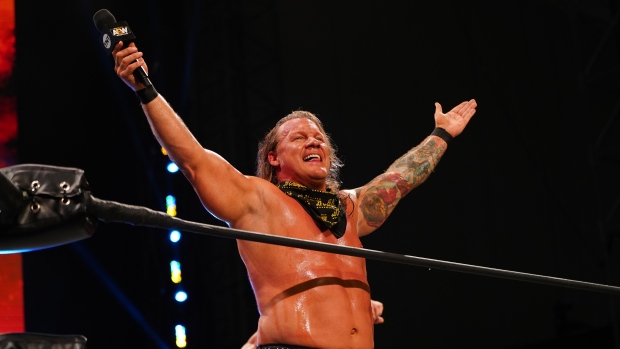 The Five Labours of Jericho continue on Wednesday night's AEW Dynamite with Chris Jericho set to take on The Pinnacle's Wardlow. Plus, the Good Brothers defend their Impact World Tag Team Championships against the Dark Order. You can catch AEW Dynamite LIVE at 8pm et/5pm pt on TSN2, the TSN app, streaming on TSN Direct and on TSN.ca.

The Five Labours of Jericho - Match #4: "Le Champion" Chris Jericho vs. Wardlow (w/ Maxwell Jacob Friedman) - Thus far, Chris Jericho has handled everything MJF has thrown at him. He defeated Shawn Spears in a match where Spears could legally use a chair. He survived the death match king Nick Gage in one of the most brutal encounters in AEW history. Then last week, Jericho bested old rival Juventud Guerrera in a match where Jericho was forced to hit a top-rope move to win the match and did so by executed the Judas Effect from the top turnbuckle. But his next Labour might be his most difficult yet. After beating Guerrera in a hard-fought encounter, MJF let Jericho know immediately what was up next when both Jericho and Guerrera were laid out by the hulking Wardlow. To make matters worse for Jericho, MJF will be at ringside during the match, giving the seven-time world championship yet another matter to deal with on Wednesday night. Beating Wardlow is a tall order on its own. Only "Hangman" Adam Page has been able to defeat Wardlow in a standard singles match in AEW. Can Jericho get one step closer to getting his hands on MJF or will Wardlow stop him in his tracks?

Impact World Tag Team Championship match: The Good Brothers (Doc Gallows and "Machine Gun" Karl Anderson) (c) (w/ Don Callis) vs. The Dark Order (Evil Uno and Stu Grayson): We've already seen NWA and New Japan Pro-Wrestling titles defended on Dynamite and on Wednesday night, there will be another first when The Elite's Good Brothers defend their Impact titles against the Dark Order team of Stu Grayson and Evil Uno. This will be Gallows and Anderson's first defence of the titles they won back at July's Slammiversary pay-per-view in a four corners match over Fallah Bahh and No Way, Willie Mack and Rich Swann and the former champions Violent By Design (Joe Doering and Rhino). It's the second time that the former IWGP and WWE World Tag Team Champions have held the Impact titles and they hope this reign is more successful than the first. The Good Brothers only made one successful title defence in their first reign before dropping them to FinJuice (David Finlay and Juice Robinson). They will have their hands full on Wednesday night because Uno and Grayson are no strangers to gold themselves. The Gatineau, Que. natives have held tag titles in promotions across North America, including Pro Wrestling Guerrilla, CHIKARA and International Wrestling Syndicate. This will mark the third time that these two teams have done battle, but the first time in a traditional tag-team match. Will Uno and Grayson bring gold back to the Dark Order or will the Good Brothers ensure that every member of The Elite remains a champion.

Trios match: The Elite ("The Cleaner" Kenny Omega, Nick Jackson and Matt Jackson) (w/ Don Callis, Brandon Cutler and Michael Nakazawa) vs. Dante Martin, Matt Sydal and Mike Sydal - Speaking of The Elite, the rest of the group is also in action on Wednesday night when the AEW World Champion and the AEW World Tag Team Champions team up in trios action against a team of high flyers in Dante Martin and the Sydal brothers. While Martin is one of the youngest competitors in AEW and Top Flight (Martin and older brother Darius) took on the Young Bucks in a losing effort in AEW, The Elite's history with Matt Sydal is a long one that spans several years. In NJPW, the Young Bucks had a number of encounters with Sydal and his partner Ricochet over the IWGP Junior Heavyweight Tag Team Championships with both teams claiming the crowns over the other at various points. Then in the summer of 2016, the team of Sydal, Ricochet and Satoshi Kojima took the NEVER Openweight Six Man Tag Team Championships from the Bullet Club team of the Jacksons and Omega. The match, then, on Wednesday night will give Omega and the Jacksons another opportunity to take on an opponent who none of the three particularly cares for at all. It will also allow the three men to back up what they said last week on Dynamite: that there was really nobody left in AEW to take their titles. Will The Elite continue their run of dominance or will the the Sydals and Martin spring the upset?

Trios match: Hardy Family Office (Matt Hardy, Marq Quen and Isiah Kassidy) vs. Best Friends (Chuck Taylor, "Freshly Squeezed" Orange Cassidy and Wheeler YUTA) - In "Big Money" Matt Hardy's quest to reach the top of AEW with his faction, he's managed to step on a few toes. Well, to be more accurate, Matt Hardy has pissed off a lot of people all at once and seems to be feuding with scads of people all at the same time. That's just how Matt Hardy does business. Case in point, it would be bad enough for most people to have run afoul of Christian Cage and the Jurassic Express (Jungle Boy, Luchasaurus and Marko Stunt) alone, but not only has Hardy angered them, he and his crew have managed to draw the ire of Best Friends, as well, in recent weeks. On Tuesday night's AEW Dark, Private Party (Quen and Kassidy) picked up a win over Taylor and YUTA in a match the HFO hopes sets the tone for Wednesday night's encounter. Can the HFO get the better of Best Friends again or will Taylor, Cassidy and YUTA get a measure of revenge against Hardy?

Kris Statlander vs. "The Native Beast" Nyla Rose - While Statlander and Rose are hardly strangers to one another, Wednesday's match represents the first between the two women in some time and comes at a pivotal time for both competitors. Statlander and Rose have met on four occasions in AEW and the rivalry has been particularly one-sided - Rose is 4-0 in those matches, including an AEW Women's World Championship match at Revolution 2020 in which Rose successfully defended her title. Yet a lot can change in 18 months. Statlander missed much of that time with a torn ACL, but since her return to action in the spring, she's been virtually unstoppable, going 12-0 in singles competition and 14-0 in total. Still, Rose represents a jump up in competition for Statlander and she's not exactly in the best of moods right now. Rose is coming off an unsuccessful challenge of Dr. Britt Baker last month when she was unable to become the first two-time AEW Women's World Champion. A loss to Statlander would be a second-straight loss in a high-profile match and all it takes is a couple of losses to snowball into a losing streak. The former champion can ill afford that to happen. Can Statlander stay red-hot or will Rose be able to get back on track?

Darby Allin (w/ Sting) vs. "Red Death" Daniel Garcia - Garcia made his Dynamite debut in a losing effort last Wednesday night when he teamed with 2.0 (Jeff Parker and Matt Lee) against the team of Allin, Eddie Kingston and Jon Moxley. But Garcia's confidence remains sky high enough that he's challenged Allin to a rematch, giving him his highest-profile match to date in his young career. While the Buffalo native is still searching for his first AEW victory, Garcia shouldn't be underestimated. Though only 22, Garcia has already stepped into the ring against some of the top wrestlers in the industry including Tony Deppen, Calvin Tankman, Jordan Oliver and Josh Alexander. Allin heads into the match riding a six-match winning streak in singles action since dropping the TNT Championship to Miro in May. Will the highly favoured Allin make it seven in a row or can Garcia come up with the biggest win of his career?

-  Dan Lambert was embarrassed by "The Murderhawk Monster" Lance Archer last month on Dynamite when the American Top Team kingpin disparaged AEW. Lambert makes his return to AEW on Wednesday night and claims he won't be coming alone. Just what - or whom - does Lambert have in store for the IWGP United States Champion?