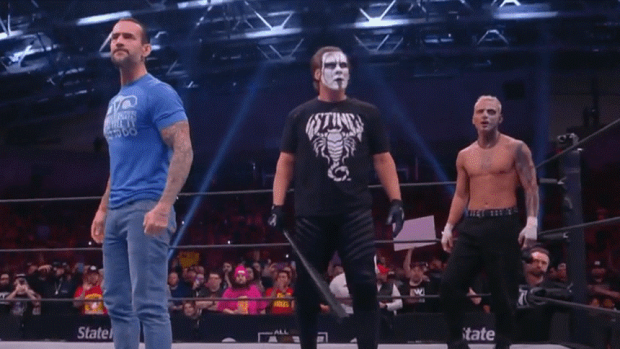 CM Punk teams up with Darby Allin and Sting to take on The Pinnacle's MJF and FTR, while Adam Cole does battle with Orange Cassidy and Ruby Soho meets Nyla Rose in a TBS Championship Tournament semi-final match. You can catch AEW Dynamite LIVE at 8pm et/5pm pt on TSN2, streaming on TSN Direct and on TSN.ca.

Trios match: CM Punk, Darby Allin and Sting vs. The Pinnacle (Maxwell Jacob Friedman, Dax Harwood and Cash Wheeler) (w/ Tully Blanchard) - It might be Christmastime, but nobody is going to be in a festive mood when these six men step into the ring on Wednesday night. While the war of words between Punk and MJF has been going on for several weeks now, the injection of Sting, Allin and FTR into the proceedings is a more recent development. On the Dec. 10 edition of Rampage, FTR and Blanchard jumped Sting and Allin during a backstage interview with Tony Schiavone and left them lying. Sting and Allin sought revenge on last week's Dynamite, attacking FTR after MJF's victory over Dante Martin. When the numbers game caught up to Allin and Sting, Punk came down to even the odds. Wednesday night's match won't be the first meeting between FTR and Sting and Allin. The latter duo picked up the victory in their first match at Grand Slam on Sept. 21. Wednesday night's encounter is unlikely to be pretty.

TBS Championship Tournament semi-final match: "The Native Beast" Nyla Rose vs. Ruby Soho - Former AEW Women's World Champion Nyla Rose is now only two matches away from regaining gold, but to do so, she's going to have to get by Ruby Soho, something very few people have been able to do thus far in AEW. Soho reached the semi-finals by defeating Penelope Ford and Kris Statlander. By virtue of her Top Five ranking, Rose got a first-round bye and then defeated another former AEW Women's World Champion in Hikaru Shida in the quarterfinals. While Wednesday night's match is the first ever singles match between the two competitors, the women have met twice before in tag-team competition. On the Nov. 11 edition of Dark: Elevation, Soho teamed with Ryo Mizunami to defeat the team of Rose and Emi Sakura. Then on the Dec. 10 episode of Rampage, it was Rose who would come out victorious when she, Ford and The Bunny defeated Soho, Tay Conti and Anna Jay. The winner of Wednesday night's match will meet the winner of the other semi-final, Thunder Rosa vs. Jade Cargill, for the chance to become the inaugural TNT Champion.

Adam Cole (w/ Nick Jackson, Matt Jackson, Bobby Fish and Brandon Cutler) vs. "Freshly Squeezed" Orange Cassidy (w/ Chuck Taylor, Trent? and Wheeler YUTA) - After going head to head in a pair of tag-team matches, Adam Cole and Orange Cassidy meet one on one on Wednesday night. Each man has split the previous two meetings. On the Nov. 25 Rampage, Cole and Fish beat Cassidy and YUTA, but on last week's Rampage, CHAOS (Cassidy, Trent?, Taylor and Rocky Romero) defeated Cole, Fish and the Young Bucks. Despite spending time in many of the same promotions over the years, Wednesday night's match marks the first ever singles meeting between the two men. The task ahead for Cassidy is an onerous one because Cole remains undefeated in singles competition in AEW at 5-0. While Cassidy heads into the match of his last two singles matches, his record for 2021 is an impressive one, having gone 19-2-1 in one-on-one competition. Considering the way things have gone in recent weeks between The Elite and Best Friends, you can probably count on each man's entourage getting involved one way or another.

Griff Garrison (w/ Brian Pillman Jr.) vs. Malakai Black - Griff Garrison is looking for a fight on Wednesday night. He challenged Malakai Black to a match after Black sprayed the black mist in the face of Julia Hart on the Dec. 8 edition of Dynamite for no apparent reason. Out for revenge, Garrison better hope he didn't bite off more than he can chew in the form of Black. A tag-team specialist alongside Brian Pillman Jr. in the Varsity Blondes, Garrison hasn't had the best of luck in solo action in AEW, posting a record of 4-8, but that won't be a concern as he looks to avenge Hart. But does Garrison need to worry about more than just Black on Wednesday night? During last week's Dynamite, we saw Black welcome in a new member of the House of Black, telling the masked man that he was now "so much more than a king." If that "king" is who many believe it to be, Garrison could be in big trouble.

- AEW will air a special video with more details on the inaugural Owen Hart Cup Tournament that features some home movies, match footage from New Japan Pro-Wrestling and wrestlers speaking on the legacy of the late, great Owen Hart