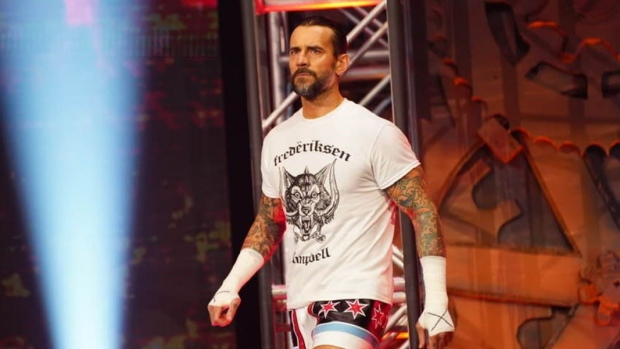 With his feud with MJF still simmering, CM Punk steps into the ring with The Pinnacle's Wardlow. Plus, Sammy Guevara defends his interim TNT Championship against Daniel Garcia and bitter rivals Hikaru Shida and Serena Deeb meet for a fourth time. ​You can catch AEW Dynamite LIVE at 8pm et/5pm pt on TSN2, streaming on TSN Direct and on TSN.ca.

CM Punk vs. Wardlow (w/ Shawn Spears and Maxwell Jacob Friedman) - CM Punk wants a match with MJF and he's prepared to do whatever he can to get one. On last week's Dynamite, Punk entered the ring during MJF's match and hit a GTS on his opponent, Capt. Shawn Dean, to ensure that MJF would get disqualified and start 2022 at 0-1. Before Punk can frustrate MJF into accepting his challenge, he'll have to deal with the hulking Wardlow. Wardlow hasn't lost a singles match since August and enters Wednesday night on a 12-match winning streak in one-on-one competition. But things aren't all rosy for Wardlow. Obvious tension is brewing within The Pinnacle. Spears and MJF don't seem to care for Wardlow playing to the fans of late or even holding any ambition beyond serving MJF's aims. And Wardlow clearly doesn't appreciate being talked down to or having Spears lay out all of his defenceless opponents with chairs once he's done with them. Taking on Punk will be one of the biggest challenges of Wardlow's career yet and, thus far, he hasn't been able to get the job done in his highest-profile encounters, falling to defeat against the likes of Cody Rhodes, Chris Jericho and "Hangman" Adam Page. Can Wardlow pull off the biggest victory of his career or will Punk use the opportunity to further enrage MJF?

Interim TNT Championship match: "The Spanish God" Sammy Guevara (c) vs. "Red Death" Daniel Garcia (w/ 2point0) - Daniel Garcia didn't waste any time trying to get what he wanted on Saturday night. Only seconds after Sammy Guevara survived a brutal encounter with Dustin Rhodes to claim the interim TNT Championship, Garcia entered the ring to attack the obviously very tired Guevara. But it appears the attack worked because Garcia now has what he was after: a shot at Guevara's belt. While Guevara and Garcia have never wrestled before, Garcia is coming off of a dominating victory over Guevara's close friend, Fuego del Sol. After having recently lost the TNT Championship to Cody Rhodes, Guevara would be loath to lose the interim version of the title and miss out on another shot at Rhodes to regain what he lost. Will Guevara retain or will Garcia capture gold for the first time in his AEW career?

Hikaru Shida vs. Serena Deeb - One of the most heated rivalries in AEW could come to an end on Wednesday night when former AEW Women's World Champion Hikaru Shida faces former NWA Women's World Champion Serena Deeb for a fourth time. Their first encounter back in October began cordially enough, but it didn't end that way. After winning the match, an enraged Deeb used a trophy made for Shida on the occasion of becoming the first woman to win 50 matches in AEW as a weapon. Later that month, Shida got a measure of revenge by defeating Deeb in the first round of the TBS Championship Tournament, but Deeb would strike back by interfering in Shida's next tournament match and handing the victory to Nyla Rose. At Winter Is Coming last month, Shida used a jackknife cradle to pick up the win over Deeb, but that still hasn't settled things between the two women. Will this feud finally come to an end on Wednesday night?

Dante Martin (w/ Lio Rush) vs. Powerhouse Hobbs (w/ Team Taz) - Team Taz gets its first shot at revenge against Dante Martin on Wednesday night when Will Hobbs steps in the ring against the man who spurned them. In the weeks leading up to Winter Is Coming, Team Taz recruited Martin with a full-court press, finally getting the 20-year-old Minneapolis native to sign on the dotted line and join the crew, much to the chagrin of Lio Rush. But it was all a ruse. Martin turned on Ricky Starks during the Dynamite Diamond Ring Battle Royal to humiliate the FTW Champion and infuriate Taz. Martin was well aware of the risks when he did what he did and will know have to answer to Hobbs for the betrayal. Can Hobbs make Martin pay or will Martin continue to get the better of Team Taz?