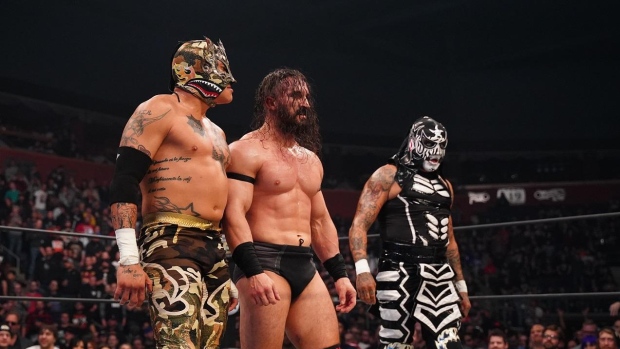 Death Triangle teams up with Cody Rhodes to take on the team of FTR, Andrade El Idolo and Malakai Black in a heated eight-man tag. Plus, Bryan Danielson faces Colt Cabana and CM Punk is in action. You can catch AEW Dynamite LIVE at 8pm et/5pm pt on TSN5, streaming on TSN Direct and on TSN.ca.

Eight-man tag: Death Triangle (PAC and AEW World Tag Team Champions Rey Fenix and Penta El Zero Miedo) (w/ Alex Abrahantes) and "The American Nightmare" Cody Rhodes (w/ Arn Anderson) vs. AAA World Tag Team Champions FTR (Cash Wheeler and Dax Harwood) (w/ Tully Blanchard), Andrade El Idolo (w/ Jose the Assistant) and Malakai Black - The rancor among these eight men has been building for some time and it will finally come to a head on Wednesday night in Chicago. The enmity on display here has created some odd alliances. While PAC and Cody Rhodes were able to get the better of Andrade El Idolo and Malakai Black at Full Gear, the discord between both teams was on display with Rhodes and PAC winning seemingly in spite of each other. As for FTR, the AAA World Tag Team Champions got involved in Andrade's business when he paid MJF for their services and will once again have the opportunity to get their hands on the AEW World Tag Team Champions, Lucha Bros. Rey Fenix and Penta El Zero Miedo defeated FTR at Full Gear in a title match, but when Dax Harwood was pinned, he wasn't the legal man and now "the Top Guys" want another crack at becoming two-time AEW champions. Things are unlikely to go smoothly when these eight men take the ring on Wednesday night.

"The American Dragon" Bryan Danielson vs. Colt "Boom Boom" Cabana - The No. 1 contender to "Hangman" Adam Page's AEW World Championship, Bryan Danielson has vowed to kick in the heads of every member of Dark Order before he gets his shot at Page. Danielson proved to be a man of his word last week on Dynamite when he gave a brutal beating to Evil Uno in their match. This week, Danielson meets old friend Colt Cabana in Cabana's hometown of Chicago. Danielson and Cabana go way back, having come up in Ring of Honor at the same time and even traveled together. The two first wrested in 2004, but Danielson and Cabana haven't wrestled in over 12 years. In their last match in June of 2009, Cabana was victorious in a Four Corner Survival match at ROH's Manhattan Mayhem III, defeating Danielson, Claudio Castagnoli and D-Lo Brown. Overall, Danielson is 7-4-1 in his career against Cabana. Despite knowing Cabana for years, Danielson will not let friendship stand in the way of sending a message to the Hangman. Can Cabana get the better of Danielson or will he become the latest victim of the newly sadistic American Dragon?

CM Punk vs. QT Marshall (w/ The Factory) - It wouldn't be a Chicago show without CM Punk on the card and on Wednesday night, the hometown boy takes on a first-time opponent in QT Marshall. When we last saw Punk, he was introducing himself to Maxwell Jacob Friedman on last week's Dynamite. Well, kind of. As MJF basked in the glory of his victory over Darby Allin at Full Gear, Punk interrupted the proceedings, but didn't say a word. When Friedman offered him a handshake, Punk chuckled and walked away. Before we learn anything more about that interaction, Punk must deal with Marshall on Wednesday night and a match with Marshall normally means also contending with members of The Factory on the outside of the ring. Punk has still yet to taste defeat in AEW, so it will be a tall task for Marshall, as well. Will Punk make it 7-0 or can Marshall pull off a shocking upset?

TBS Championship Tournament quarterfinal match: Jamie Hayter (w/ Dr. Britt Baker, DMD and Rebel) vs. Thunder Rosa - Jade Cargill moved on to the TBS Championship Tournament semis last Friday on Rampage with a win over Red Velvet and she will find out who she's set to face on Wednesday night when Thunder Rosa meets Jamie Hayter. Not only does this match have huge stakes, it will be a personal one for Rosa because Hayter is an associate of her longtime rival AEW Women's World Champion Britt Baker. Thunder Rosa would love to send a message to Baker through this match and history is on her side. While she and Hayter have never met in one-on-one competition before, Thunder Rosa is 4-0 against Hayter in tag-team matches, including at Full Gear when she teamed up with Hikaru Shida to defeat Hayter and Nyla Rose. Will Thunder Rosa move on or will Hayter finally pick up a win against the former NWA Women's World Champion?