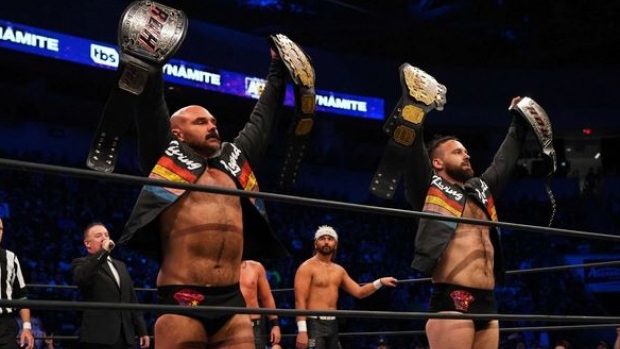 FTR (Dax Harwood and Cash Wheeler) put their ROH World Tag Team Championship on the line against Roppongi Vice (Trent Beretta and Rocky Romero. Plus, Samoa Joe meets Kyle O'Reilly for a spot in the Owen Hart Foundation Cup final and Wardlow takes on Shawn Spears in a steel-cage match with MJF as referee. You can catch AEW Dynamite LIVE at 8pm et/5pm pt on TSN2, streaming on TSN Direct and on TSN.ca.

ROH World Tag Team Championship match: FTR (Dax Harwood and Cash Wheeler) (c) vs. Roppongi Vice (Trent Beretta and Rocky Romero) (w/ Chuck Taylor) - On last week's Dynamite, Trent Beretta and Rocky Romero revealed that Roppongi Vice has reformed full-time and set their sights on FTR's ROH World Tag Team Championship. As a team, Beretta and Romero were four-time IWGP Junior Heavyweight Tag Team Champions, holding victories over the likes of the Young Bucks (Nick Jackson and Matt Jackson), reDRagon (Bobby Fish and Kyle O'Reilly) and Suzuki-gun's Yoshinobu Kanemaru and Taichi. The team has yet to win North American gold, but has all the tools in the world to do so. But this current FTR iteration is on a heater. Not only the ROH champs, but also the AAA World Tag Team Champions, Dax Harwood and Cash Wheeler have been on another level in recent weeks, wrestling in a five-star classic with Jay and Mark Briscoe to win the ROH straps at Supercard of Honor and then successfully defending both of their titles against the Young Bucks on the Apr. 6 edition of Dynamite. To defeat FTR right now, Roppongi Vice will need to wrestle a nearly perfect match. They're certainly capable of greatness, but do they have enough to knock off FTR?

Owen Hart Foundation Cup semi-final match: ROH TV Champion Samoa Joe vs. Kyle O'Reilly (w/ Bobby Fish) - Delta, BC's Kyle O'Reilly survived Rey Fenix last week in a hard-fought match to advance to the Owen Hart semis where he meets Samoa Joe. Joe outlasted "Joker" entrant Johnny Elite aka John Hennigan to reach the final four. Now O'Reilly and Joe will face off with the winner set to take on Adam Cole in the tournament final at Sunday's Double or Nothing pay-per-view in Las Vegas. Joe and O'Reilly have only met once before. At a March 28, 2015 ROH show in Baltimore, Joe was victorious over O'Reilly via Muscle Buster. Still undefeated in AEW, Joe put Hennigan away with the Muscle Buster and will once again look to utilize it against O'Reilly. But O'Reilly is also undefeated in AEW singles competition and won't be an easy out. One of O'Reilly's greatest strengths is his ability to identify weakness in his opponents. Last week, O'Reilly knew that Fenix was coming off of a significant arm injury and used that to his advantage, utilizing an armbar to earn a submission victory. And if there's one person on the AEW roster who's able to go strike for strike with Joe, it's O'Reilly. Both men will leave it all in the ring on Wednesday night, but only one will advance to the final. Which man will meet Adam Cole on Sunday?

Owen Hart Foundation Cup semi-final match: Dr. Britt Baker, DMD (w/ Rebel and Jamie Hayter) vs. Toni Storm - Former AEW Women's World Champion Britt Baker might have been penciled in as the favourite in the women's Owen Hart Foundation Cup tournament, but in order for her to live up to that billing, she's going to have to get past a woman who already holds a victory over her in Toni Storm. While this might only be the semi-final, the Baker versus Storm matchup is more than worthy of a final. Since her arrival in AEW this past match, the 26-year-old New Zealand-born Storm is undefeated with her biggest victory to date coming against Baker. In a tag-team match on the May 6 edition of Rampage, the team of Storm and Ruby Soho defeated Baker and Jamie Hayter when Storm pinned Baker following the Storm Zero. Having already tasted gold in AEW, Baker knows that winning the Owen Hart would fast-track her on the road back to the world title, but the challenge of Storm will be the biggest obstacle in the way of that. A spot in Sunday's final at Double or Nothing and a meeting with Soho or Kris Statlander is on the line. Which of these two women will emerge victorious?

Steel-cage match with Maxwell Jacob Friedman as referee: "The Chairman" Shawn Spears vs. "Mr. Mayhem" Wardlow - Ahead of his match against his employer MJF at Double or Nothing, Wardlow must endure one last challenge in the form of former Pinnacle stablemate, Shawn Spears. Dubbing himself "The Giant Killer," St. Catharines, Ont.'s Spears attempted to live up to his name on Rampage by defeating the debuting Big Damo. Spears sent the opening salvo to his much larger opponent during last week's Dynamite when he assisted in MJF's belt lashing of Wardlow with a series of chair shots. Singularly focused on getting his hands on MJF, Wardlow is unlikely to overlook the challenge posed by Spears. If anything, Wardlow will view this cage match with Spears as one last opportunity to send a message to MJF and give him a preview of what's to come on Sunday. While MJF and Spears might think they've set a trap for Wardlow, might they have actually fallen into his as they'll be both locked inside a steel cage with the behemoth?

AEW World Tag Team Champion Jungle Boy (w/ Luchasaurus and Christian Cage) vs. Shane "Swerve" Strickland (w/ Keith Lee) vs. FTW Champion "Absolute" Ricky Starks (w/ Powerhouse Hobbs) - Before Jurassic Express defends their AEW World Tag Team Championship in a three-way match against Team Taz and the team of Swerve Strickland and Keith Lee at Double or Nothing on Sunday, half of the competitors in that match meet in a three-way singles encounter on Wednesday night. The challenge for the match was laid down by Christian Cage on last week's Dynamite and it seemed to catch Jungle Boy by surprise. It stemmed from what happened on the May 11 edition of Dynamite when Ricky Starks successfully defended his FTW title against Jack Perry. Cage blamed the loss on the intervention of Swerve, who had been attempting to prevent Starks from cheating, but his presence acted as a distraction for Jack Perry who fell victim to a Roshambo. On Wednesday, Jungle Boy gets the opportunity to not only avenge that loss, but to send a message to the two other teams looking to take his title on Sunday night. But what about Cage? In recent weeks, it has seemed like Cage hasn't been on the same page with his team. Can all three men get it together before Sunday night's title match?

- Before their AEW World Championship match at Double or Nothing, the champion, "Hangman" Adam Page, will meet the challenger, CM Punk, face to face