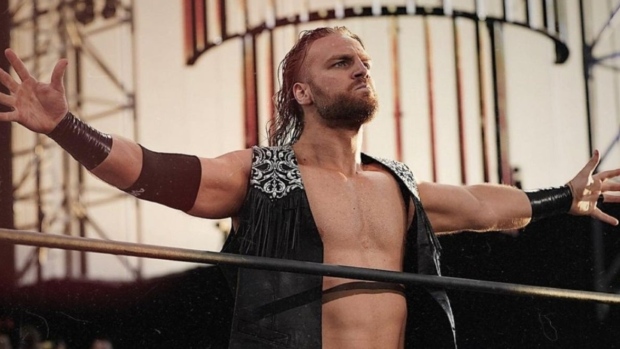 Former AEW World Tag Team Champions collide when "Hangman" Adam Page teams with the Dark Order to take on Kenny Omega and The Elite in a 10-man elimination tag match on AEW Dynamite. You can catch AEW Dynamite: Fight for the Fallen LIVE at 8pm et/5pm pt on TSN5, the TSN app, streaming on TSN Direct and on TSN.ca.

10-man elimination tag-team match: The Elite ("The Cleaner" Kenny Omega, Nick Jackson, Matt Jackson, "Machine Gun" Karl Anderson and Doc Gallows) (w/ Don Callis and Brandon Cutler) vs. "Hangman" Adam Page and the Dark Order (Stu Grayson, Evil Uno, Alex "3" Reynolds and John "4" Silver) - The stakes couldn't get any higher in this colossal 10-man tag. Should the team of Page and the Dark Order win, the Hangman will get a shot at Kenny Omega's AEW World Championship and the Dark Order will receive a title match for the Young Bucks' AEW World Tag Team Championship, but if The Elite emerges victorious, neither Hangman nor the Dark Order can challenge for those respective titles as long as they're held by Omega and the Jacksons. The match also marks only the second in-ring meeting between Omega and Page since their partnership dissolved. Omega and Page held the tag-team titles for 228 days before dropping them to FTR at All Out 2020. After that, Omega defeated Page in the final of the World Title Eliminator Tournament at Full Gear 2020 before going on to defeat Jon Moxley for the world title. Still obviously conflicted about where he stands after his defection from The Elite, can Page defeat his former friends or will The Elite manage to remove the thorn from their sides that is the Dark Order for good?

The Five Labours of Jericho Match #2: "The Painmaker" Chris Jericho vs. Nick Gage - In order to defeat one of the toughest and most dangerous men in the history of pro wrestling, Chris Jericho is bringing back "The Painmaker," his makeup-wearing incarnation who terrorized New Japan Pro-Wrestling. After getting past Shawn Spears last week in his first labour, Jericho now must take on the death match king and the leader of the MDK gang, Nick Gage. A four-time Combat Zone Wrestling Heavyweight Champion, there is nobody more fearless in professional wrestling than Gage, who will literally do anything to his body to pick up a victory. The match between the two men on Wednesday night will be anything goes, which is right in Gage's wheelhouse. Expect all manner of mayhem and blood. Can Jericho survive Gage and continue his path to a meeting with MJF or will Gage introduce Jericho to the meaning of MDK?

IWGP United States Championship match: "The Murderhawk Monster" Lance Archer (c) (w/ Jake "The Snake" Roberts) vs. Hikuleo - Fresh off of defeating Jon Moxley to regain the US title in an absolutely hellacious Texas Death Match last Wednesday, Lance Archer already faces his first defence against the Bullet Club's Hikuleo, who is making his AEW debut. Hikuleo's pro wrestling pedigree is second to none. A native of Kissimmee, FL, Hikuleo is the son of the legendary Haku and the younger brother of Tama Tonga and Tanga Loa, the Guerrillas of Destiny. Trained by the monstrous Bad Luck Fale, Hikuleo is looking to bring the US title back to Bullet Club where it was previously held by Kenny Omega, "Switchblade" Jay White and Cody Rhodes. Archer and Hikuleo have met once before. During a 2017 World Tag League show in Toyohashi, the Suzuki-gun team of Killer Elite Squad (Archer and Davey Boy Smith Jr.) and  El Desperado defeated Hikuleo and the GOD in a six-man tag. Can Hikuleo win his first New Japan goal or will Archer's second reign with the title continue?

FTR (Cash Wheeler and Dax Harwood) (w/ Tully Blanchard) vs. Proud and Powerful (Santana and Ortiz) (w/ Konnan) - The Pinnacle/Inner Circle war continues on another front as FTR and PnP finally meet in their first AEW tag-team match. Two of the very best tag teams anywhere in the world, these four men have been feuding for weeks, both physically and with cutting barbs on the mic. While these duos have competed against one another in the past, those matches were multi-man or six-man tags. They last met on the July 7 edition of Dynamite when the Pinnacle team of FTR and Wardlow defeated Santana, Ortiz and Jake Hager. Though FTR have held the AEW World Tag Team Championship, PnP have yet to wear gold in AEW. A victory over the former champions would go a long way in putting Santana and Ortiz in line for a shot against the Young Bucks. Both teams will have a second in this match with Pinnacle advisor Tully Blanchard in FTR's corner and Konnan accompanying PnP to the ring. Can FTR once again assert themselves in the title picture with a victory or will Santana and Ortiz put Inner Circle in the win column?

Six-man tag team match: Hardy Family Office (Angelico, Marq Quen and Isiah Kassidy) (w/ Matt Hardy) vs. Christian Cage and Jurassic Express (Luchasaurus and Jungle Boy) (w/ Marko Stunt) - Christian Cage might have defeated Matt Hardy in their one-on-one match two weeks, but Big Money Matt isn't finished with his eternal rival. Hardy's team of Angelico and Private Party will look to inflict more damage on Cage as he teams up with his allies in Luchasaurus and Jack Perry. The recent enmity among these men stems from the Casino Battle Royal at Double or Nothing in May when Cage rejected the chance to team up with Hardy and eliminated him from the match. Jungle Boy and Cage would end up being the last two men standing with Perry picking up the victory. Since then Hardy and the HFO have tried to make the lives of Cage and Jurassic Express a living hell. While issues are unlikely to be permanently settled on Wednesday night, both teams would like to send a message to the other with a victory.