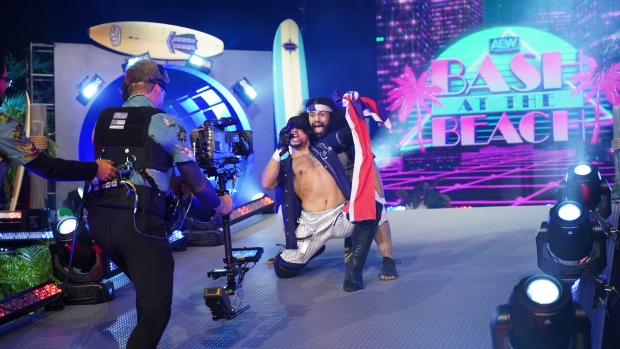 Santana and Ortiz , All Elite Wrestling

The 100th edition of AEW Dynamite features a grudge match between Inner Circle's Proud-N-Powerful (Santana and Ortiz) and FTR (Cash Wheeler and Dax Harwood) of The Pinnacle. Plus, The Elite is in eight-man tag-team action and CM Punk speaks ahead of his first match with the company at All Out. You can catch AEW Dynamite LIVE at 8pm et/5pm pt on TSN2, the TSN app, streaming on TSN Direct and on TSN.ca.

Proud-N-Powerful (Santana and Ortiz) vs. FTR (Cash Wheeler and Dax Harwood) (w/ Tully Blanchard) - If this is it for FTR, they're going out with a bang. In the weeks leading up to Wednesday night's match, the "Top Guys" have made it clear that this might be their last match as a team thanks to the injury incurred by Wheeler during the first meeting between these two teams on July 28. While FTR picked up the victory, it was a pyrrhic one. Dumped outside of the ring, Wheeler's arm caught a metal hook attached to the turnbuckle and ripped open a deep gash. The cut went so deep that Wheeler says he incurred nerve damage and he's been advised against competing in this match. But FTR's hatred for Santana and Ortiz outweighs any thoughts of personal safety. How can Santana and Ortiz ensure that FTR's potential swansong isn't theirs, as well?

Eight-man tag team match: The Elite (Nick Jackson, Matt Jackson, Doc Gallows and "Machine Gun" Karl Anderson) (w/ Don Callis and Brandon Cutler) vs. Lucha Bros. (Rey Fenix and Penta El Zero Miedo) (w/ Alex Abrahantes) and Jurassic Express (Jungle Boy and Luchasaurus) (w/ Marko Stunt) - Before the Young Bucks and old rivals the Lucha Bros. meet inside of a steel cage for the AEW World Tag Team Championships at All Out, the four men will meet on opposite sides of this eight-man encounter. If you've ever seen a match in which any of the Jackson brothers meet any of the Lucha Bros., you know you're in for a must-see spectacle. Add in the Impact World Tag Team Champions, the Good Brothers, and the Jurassic Express into the equation and you've got yourself quite the combustible situation on Wednesday night. The question becomes, is victory even the desired outcome tonight or will simply inflicting punishment on the other side be enough to consider the match a success?

"The Machine" Brian Cage vs. Powerhouse Hobbs (w/ Taz, Hook and FTW Champion "Absolute" Ricky Starks) - Brian Cage has vowed to go through every member of Team Taz who betrayed him and that starts on Wednesday night in a battle of hosses in Chicago. This won't be the first time that Cage and Hobbs have met in the ring. In fact, the pair did battle on two occasions before Hobbs was welcomed alongside Cage into the Team Taz fold. Last October, Cage successfully defended his FTW Championship against Hobbs on an edition of Dynamite. Cage was also victorious in their match for All Pro Wrestling in 2018 at an event in Concord, CA. While Cage might have had Hobbs's number in the past, the presence of Team Taz at ringside greatly alters this dynamic. As difficult an opponent as Hobbs might be, Cage must still reserve some of his focus for Taz, Hook and Starks and whatever they're up to outside the ring. Can Cage successfully harness his anger and concentrate on the task at hand or will Hobbs and Team Taz prove to be too much for The Machine?

Tay Conti vs. "The Superbad Girl" Penelope Ford (w/ The Bunny) - This match was born out of the events from last Friday night's Rampage. After Conti rejected The Bunny's offer to join the Hardy Family Office, the pair met in the ring. After Conti seemingly had the match won, Ford made her way down to ringside as a distraction to both Conti and the referee. That allowed for The Blade to slip the brass knuckles to his wife and The Bunny used them to deck Conti and pick up an ill-gotten victory. Now, only days ahead of the Women's Casino Battle Royal at All Out, Conti has an opportunity to extract a measure of revenge against Ford. This will mark only the second time that Ford and Conti have met in the right and first time in singles action. On the Dec. 30, 2020 edition of Dynamite, the team of Conti and Anna Jay were victorious over Ford and Britt Baker. Will Conti have her vengeance and send a message to the rest of the field ahead of All Out or will Ford get another one over on the Brazilian judoka?

"Freshly Squeezed" Orange Cassidy (w/ Chuck Taylor, Wheeler YUTA and Kris Statlander) vs. Jack Evans (w/ The Hardy Family Office) - If Orange Cassidy thought that last week's win over Matt Hardy was enough to put to bed his feud with the HFO, he was wrong. Cassidy must now contend with one half of TH2 in Jack Evans. Cassidy and Evans have met in multi-man matches and Cassidy and Evans's partner, Angelico, have wrestled in a pair of singles matches, but this will be the first time the two have faced off in a one-on-one encounter. Evans comes into the match not in the greatest of form when it comes to his singles career. He's 1-7 in his last eight singles matches and is coming off of a loss to "The Bastard" PAC on the Aug. 3 edition of AEW Dark last time out. Cassidy, on the other hand, is riding high and is undefeated in singles competition in 2021. His last loss in a one-on-one match came at the hands of Maxwell Jacob Friedman last December. Can Cassidy continue his impressive streak or will Evans and the HFO ensure it finally ends?

- After putting his career on the line for one more match with MJF, "Le Champion" Chris Jericho speaks with Jim Ross

- Meanwhile, Jericho's opponent at All Out, Maxwell Jacob Friedman, talks to Tony Schiavone