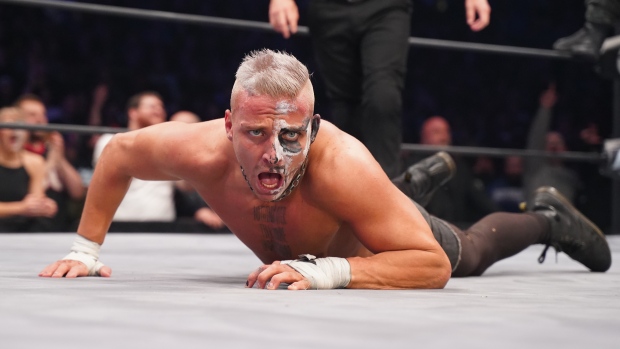 It's Night 1 of Fyter Fest on Dynamite with a card headlined by Darby Allin and "All Ego" Ethan Page meeting in a coffin match. Plus, Jon Moxley defends his IWGP United States Championship against "Machine Gun" Karl Anderson and eternal rivals Christian Cage and Matt Hardy square off for the first time in AEW. You can catch Fyter Fest Night 1 LIVE at 8pm et/5pm pt on TSN2, the TSN app, streaming on TSN Direct and on TSN.ca.

Coffin match: Darby Allin (w/ Sting) vs. "All Ego" Ethan Page (w/ Scorpio Sky) - The rules of a coffin match are fairly straight forward - the first man to put his opponent in a coffin and seal it will be declared the victor. While Darby Allin and Ethan Page have been feuding for months in AEW, their rivalry goes back long before AEW even started. The pair was at odds for years in EVOLVE dating back to 2016 and have met one-on-one five times in the past. Page holds a 4-1 edge over Allin all-time, including a victory in a nearly 20-minute last-man standing match at EVOLVE 82 in 2017. But Allin made it to AEW before Page did and Allin held AEW gold before Page did and this has filled the Stoney Creek, Ont. native with anger. After Allin and Sting defeated Page and Scorpio Sky at Double or Nothing, Page got a measure of revenge when the Men of the Year defeated Allin in a two-on-one handicap match on the June 11 edition of Dynamite. Page's goal in getting Allin to agree to a coffin match is to haunt him forever, letting a loss in that match remind Allin of Page for the rest of his career. But in order for that to happen, Page has to first win the match. Will Page get what he wants or will Allin get the last laugh on his longtime foe?

IWGP United States Championship match: Jon Moxley (c) vs. "Machine Gun" Karl Anderson (w/ Doc Gallows and Don Callis) - For only the second time in AEW, Jon Moxley will be putting his IWGP US title on the line and will be doing so against a man who is no stranger to New Japan Pro-Wrestling gold. While Machine Gun is a four-time IWGP World Tag Team Champion, he has never held singles gold and will relish the opportunity to take it from Moxley, a man who he and the rest of The Elite have been terrorizing for months. For Moxley, this will be the fifth defence of the title he won at Wrestle Kingdom 14 by defeating Lance Archer. Moxley has already successfully defending his title against Juice Robinson, Minoru Suzuki, KENTA and, most recently on the May 12 edition of Dynamite, Yuji Nagata. Can MGKA bring back even more gold to The Elite or will Mox make it five defences in a row?

FTW Championship match: "The Machine" Brian Cage vs. "Absolute" Ricky Starks - The battle between Team Taz members has been a long time coming and has been sanctioned by Taz himself. Cage and Starks have not been on the same page for weeks, with Cage believing that Starks cost him his match at Double or Nothing against "Hangman" Adam Page when he attempted to have Cage use the FTW title as a weapon. The discord continued on the June 11 Dynamite when Cage left in the middle of a tag match to chase Starks to the back, leaving Powerhouse Hobbs alone and eventually fall to the team of Hangman and Preston "10" Vance. The match will mark Starks' return to action after a serious neck injury incurred during an April match against Page. Will this match finally put all the unrest within Team Taz to bed or is something else going on here entirely?

Christian Cage vs. Matt Hardy (w/ The Hardy Family Office) - After weeks of sneak attacks, Christian Cage will finally get his hands on Matt Hardy, a man as familiar to him as any other opponent in his illustrious career. The current rancor between the two men stems from the Casino Battle Royal match at Double or Nothing when Cage eliminated Hardy from the match after spurning his offer to work together. Since then, Hardy and the rest of the HFO have made Cage's life miserable with a series of attacks from behind and brutal beatings. Tag-team icons, Cage and Hardy have met in the ring 177 times over the years (with the vast majority coming as opponents with the occasional team-up), but this will be the first one-on-one encounter between the two in AEW and their first televised singles match since 2003. Can Cage pull this thorn from his side or will Hardy and his crew continue to terrorize the six-time world champion?

"The Superbad Girl" Penelope Ford vs. Yuka Sakazaki - "The Magical Girl" makes her return to Dynamite for the first time since February of 2020 and takes on Ford, who has gone 16-1 in singles action since losing to Hikaru Shida in a match for the AEW Women's World Championship at last year's Fyter Fest. Sakazaki, working in Japan for Tokyo Joshi Pro-Wrestling for the majority of the pandemic, returned to an AEW ring on this past Monday's Dark: Elevation with a victory over KiLynn King. Ford, currently on a three-match winning streak, was last in action on Tuesday's Dark, picking up a win over Robyn Renegade. Ford and Sakazaki have met once before in an AEW ring. On the March 3, 2020 edition of Dark, the team of Ford and Dr. Britt Baker, DMD were victorious over Sakazaki and Riho. Can Ford stay hot or will Sakazaki make it a winning return to Wednesday nights?

Sammy Guevara vs. Wheeler YUTA - In his first action since his match-of-the-year candidate encounter with Maxwell Jacob Friedman, Sammy Guevara takes on one of indie wrestling's biggest names in Wheeler YUTA. Making his Dynamite debut, the Philadelphia-born YUTA has worked for promotions across North America including CHIKARA, Ring of Honor and Game Changer Wrestling. YUTA has competed in a handful of Dark and Dark: Elevation matches against the likes of Karl Anderson, Angelico and Ryan Nemeth, who he defeated for his first AEW win earlier this month. YUTA now faces Guevara, who came out on the losing end of an instant classic 20-minute match against MJF on June 30's Dynamite thanks to interference from Friedman's Pinnacle stablemate Shawn Spears. Last Wednesday night, Guevara made it very clear to Spears that their rivalry wasn't over. Can Guevara focus on the task at hand or will YUTA be able to pull off the upset over a Guevara whose mind is very much still on the Inner Circle-Pinnacle war?