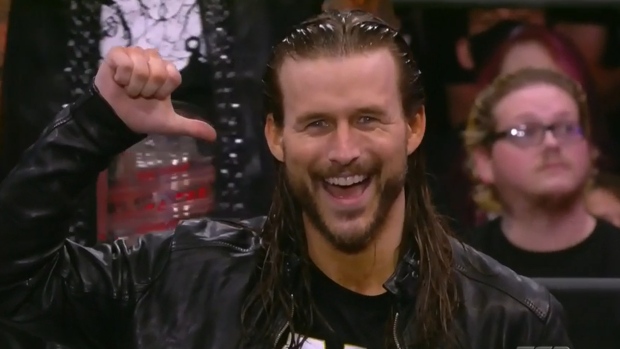 Adam Cole meets Tomohiro Ishii in an Owen Hart Foundation Cup qualifier. Plus, Jade Cargill defends her TBS Championship against Marina Shafir and Eddie Kingston takes on Daniel Garcia in a grudge match. You can catch AEW Rampage at 10pm et/7pm pt streaming on TSN Direct and on TSN.ca.

Owen Hart Foundation Cup qualifier: Adam Cole vs. "Stone Pitbull" Tomohiro Ishii (w/ Rocky Romero and Orange Cassidy) - To get into the Owen Hart Foundation Cup tournament, Adam Cole will have to go through one of the baddest men in New Japan Pro-Wrestling. Tomohiro Ishii makes his return to AEW on Friday night. Ishii last appeared in AEW in the fall when he teamed with CHAOS stablemate Orange Cassidy to defeat The Butcher and The Blade. While this is the first ever one-on-one meeting between Cole and Ishii, they have tangled in the past. Cole and Ishii were on opposite sides of Bullet Club versus CHAOS multi-man matches in NJPW in years ago. Cole enters the match looking to start fresh after failing to capture the AEW World Championship from "Hangman" Adam Page. This past week on Dynamite, Cole implored the rest of the Undisputed Elite (Nick Jackson, Matt Jackson, Bobby Fish and Kyle O'Reilly) to move forward together. Right afterwards, O'Reilly defeated Jungle Boy for a spot in the Owen Hart. And let's not forget about the presence of "Switchblade" Jay White. The Bullet Club leader interrupted the announcement of the Forbidden Door pay-per-view event to put the rest of AEW and NJPW on notice that it was still the era of Bullet Club and Undisputed Elite. Can Cole make good on his new frame of mind or will Ishii claim his spot in the tournament?

"The Murderhawk Monster" Lance Archer (w/ Shawn Spears) vs. Serpentico - Maxwell Jacob Friedman's plan on Wednesday night didn't work out the way he expected. After acquiring the services of The Butcher from Andrade El Idolo in his quest to take out Wardlow, MJF was disappointed to watch "Mr. Mayhem" have his way with his mercenary. It will be Take 2 next week on Dynamite when MJF's latest hired gun, Lance Archer, takes on Wardlow. Before then, Archer is in action in a tune-up match on Rampage when he faces Chaos Project's Serpentico. The match is Archer's first since falling to Dustin Rhodes last month. Serpentico could be in for both a long and short night - long because an ornery Archer will very likely maul him and short because it's not going to last long. Can Serpentico pull off a major upset or will Archer send a message to Wardlow?

Eddie Kingston vs. "Red Death" Daniel Garcia - Like Lance Archer, Eddie Kingston is rarely in a good mood. On Friday night, he absolutely will not be in one. On the Apr. 13 edition of Dynamite, the Jericho Appreciation Society got a victory over Kingston, Santana and Ortiz in trios action when Garcia pinned Kingston. It was far from a clean win with Chris Jericho's trusty bat "Floyd" making an appearance and directly leading to the pinfall. On Friday night, Kingston will be out for revenge against Garcia and there will be nobody else to get involved. The rest of the Jericho Appreciation Society and Santana and Ortiz have all been banned from the building. Kingston has vowed that whatever he does to Garcia on Friday night will be what he has in store for Jericho in the future. Will Garcia make it two straight over "The Mad King" or will Kingston make Garcia an example for Jericho?

TBS Championship match: Jade Cargill (c) (w/ "Smart" Mark Sterling) vs. "The Problem" Marina Shafir - Now 29-0, it seems that Jade Cargill has been more concerned about the party following her 30th victory than she has been about actually winning that 30th match. Before she can celebrate, she has to defeat former Invicta Fighting Championships featherweight Marina Shafir. While Cargill might not have her mind on the match, Mark Sterling clearly has. Cargill's representative is well aware of the challenge that Shafir poses and has been trying to get his client to take her more seriously. But in fairness to Cargill, she's run through everybody who's been put in front of her thus far in her young career and she has no reason to think Shafir will be any different. Can Shafir become the 1 in 29-1 or will Cargill make it 30 straight?