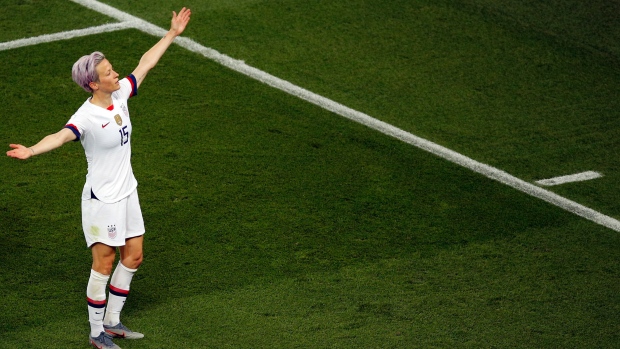 The days of Megan Rapinoe simply being known as a soccer player are long over.

The 34-year-old United States midfielder is a staunch activist, entrepreneur and even the face of a new Loewe campaign. The 2019 FIFA Women’s World Cup Golden Ball and Golden Boot recipient and the 2019 Sports Illustrated Sportsperson of the Year, Rapinoe is still adjusting to the spotlight of celebrity and everything that comes with it, but says she’s making it work.

“I’m pretty comfortable, to be honest,” Rapinoe told TSN.ca of her amplified fame. “I think it’s trying to balance the schedule and things that I have to do. Obviously, I’m still playing, so I have a job in that sense, with training and all of that, but also understanding there’s a lot of stuff that I just get to do right now which is really cool from a personal perspective, but if you’re talking about equal pay and the whole movement of what’s going on right now, it’s been a little bit of an adjustment. But I often try to take a half-step back and just think how lucky [I am] and what a privilege it is to be in this position and always take it with a big grain of appreciation for what’s going on right now. It’s pretty spectacular for all of us.”

A native of Redding, CA., her profile skyrocketed during last summer’s World Cup in France and not just because she dominated on the pitch in scoring a tournament-high six goals – including the game-winner during the Final against the Netherlands – or adopting her now famous pose after scoring against the hosts in the quarters. Rapinoe inadvertantly found herself the object of scorn of none other than the President of the United States.

How on earth did this happen?

Doing pre-World Cup media, Rapinoe was asked if she would visit the White House should the USWNT win the World Cup. She was blunt in her answer.

“I’m not going to the fucking White House.” - @mPinoe pic.twitter.com/sz1ADG2WdT

While in France, a clip of the interview went viral and it found its way to prolific Twitter user Donald Trump, who responded to Rapinoe in a three-tweet screed about it and her decision to not place her hand on her heart during the playing of the Star-Spangled Banner ahead of games.

....invited Megan or the team, but I am now inviting the TEAM, win or lose. Megan should never disrespect our Country, the White House, or our Flag, especially since so much has been done for her & the team. Be proud of the Flag that you wear. The USA is doing GREAT!

“I am a big fan of the American Team, and Women’s Soccer, but Megan should WIN first before she TALKS!” Trump wrote. “Finish the job! We haven’t yet invited Megan or the team, but I am now inviting the TEAM, win or lose. Megan should never disrespect our Country, the White House, or our Flag, especially since so much has been done for her & the team. Be proud of the Flag that you wear. The USA is doing GREAT!”

“It was so bonkers,” Rapinoe said. “Honestly, still to this very day and I know very much that it was a big deal, but because it’s so ridiculous, it kinda lessens the deal...I think if somebody were taking the office of the presidency much more seriously than I feel our president of the moment [is], then I’d feel like ‘Oh my God, that’s crazy!’ You have the leader of the free world glitching out at you. But then also in the same sense, I’m like this is so wild.”

The NWSL’s Reign FC midfielder says she’s still not quite sure what Trump’s intentions were in lashing out.

“Still to this day, I’m like what are you actually trying to say?” Rapinoe said. “You kinda like it, but you don’t because I said something negative about you, but you do like the sorta brashness, so you’re rooting for us, but you’re not? It’s just so wild.”

Yet Rapinoe says being the object of Trump’s momentary ire wasn’t without its benefit.

“He really didn’t do much except make me a lot more famous than I already was and sorta propel the causes I was already talking about much more probably than if he had never said anything,” Rapinoe said. “And the ‘Wait until you win to talk’ never really played out so well because I’ve never heard from him since.”

Despite the litany of personal awards – including the prestigious Ballon d’Or Feminine, given by France Football magazine to the best women’s player in the world – that followed her starring turn last summer, Rapinoe maintains that anything she’s received is the culmination of teamwork.

“I’m not going to shy away and not accept the award,” Rapinoe said. “But also take it all with a grain of salt in realizing what’s happening right now with the personal accolades are directly correlated to either my teammates or other people – or even take it sort of further than that just in general with that level of fame – there have been a lot of other people doing this work and talking about these things for a long time. It’s not like I’m the first one to start talking about any of it.”

Next up for Rapinoe and the USWNT is the CONCACAF Women’s Olympic Qualifying Tournament that kicks off next week, the first major competition with new head coach Vlatko Andonovski at the helm. The U.S. women find themselves in Group A alongside Costa Rica, Panama and Haiti (Canada is in Group B). The two group winners will qualify for the Summer Olympics in Tokyo. Even though the USWNT is a heavy favourite to win both the group and the whole competition, Rapinoe believes getting ahead of themselves and overlooking this tournament could be disastrous.

“You don’t get to Tokyo without these [games],” Rapinoe said. That’s kinda not just a cliche. We’ve had a qualifying hiccup in the past, going into the World Cup and that was very scary. We always take time to remind ourselves of that and understand that it really is about every little step in the process, without being too cliche and annoying about it, but it really kind of is. How we play now and how we approach our preparation now is going to set us up to even think about achieving what we want to once we, hopefully, qualify and get to Tokyo.”

Though the Olympics aren’t set to kick off until late July, the International Olympic Committee made waves last week when it announced new guidelines that would ban any kind of political protest by athletes in Tokyo.

"It is a fundamental principle that sport is neutral and must be separate from political, religious or any other type of interference," the IOC said in its statement on the matter.

Calling it “just so backwards,” Rapinoe, who was among the athletes who emulated former San Francisco 49ers quarterback Colin Kaepernick in the fall of 2016 by taking a knee during the playing of the national anthem in protest of racial inequality and police brutality (Rapinoe would go on to dedicate her speech after being named Glamour’s Woman of the Year last fall to Kaepernick), says that this decision shows the IOC’s priorities are misplaced.

“It shows me that they’re scared about the wrong things and that they’re not actually focusing on, or even thinking about or committed to, protecting the individual’s rights or protecting the rights of people who are underrepresented or minorities or looking at all to hold, not only different Olympic committees, but just countries to the highest standard that they’re then going to hold all of the athletes to,” Rapinoe said. “If you want to talk about what’s appropriate or not during the Olympics, then we should start with all of the Olympic committees and how they handle themselves and all the countries within those committees and how they handle themselves and then at the every end, sure, you can get to the athletes.”

For Rapinoe, the platform afforded by a massive quadrennial event like the Olympics is being wasted on initiatives like this.

“To me, I just envision who’s sitting in that room, who’s making those rules and what conversations are being had,” Rapinoe said. “I can’t imagine such a group of people, not just from a racial perspective, but from a societal one, as well. What are we actually trying to do? What could be the power of the Olympics, of bringing together people from nations literally all over the world in the name of sport? How can we use our collective power to leverage something for good instead of everyone getting in a room and making a stupid rule that’s totally impossible to be enforced and actually probably just motivated people to do something? It’s just so stupid. It doesn’t make sense at all.”

But before Rapinoe can take on Tokyo, there is the matter of the qualifiers. The USWNT gets their tournament underway on Tuesday in Houston against Haiti.