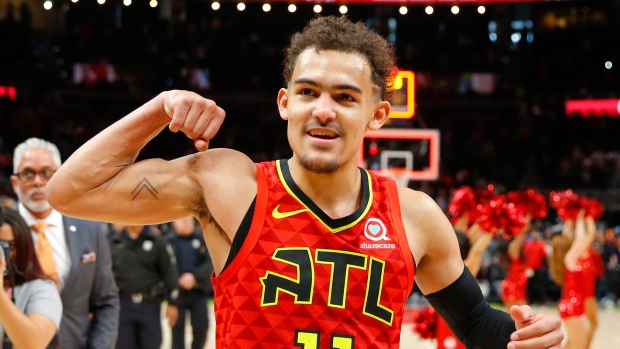 Still, the Atlanta Hawks are poised to take another big step forward in their massive rebuilding job.

With a pair of picks in the top 10 — or perhaps a single selection that's higher than what they have now, should they work out a trade — the Hawks can add to a pair of gems from the last two drafts, Trae Young and John Collins.

In all, the Hawks have five picks in the two-round draft, including No. 17 as part of a reported deal that will send Taurean Prince to the Brooklyn Nets.

"Will we try to be active?" general manager Travis Schlenk said. "Sure."

After finishing with the league's fifth-worst record (29-53), the Hawks were hopeful of moving up in the lottery — perhaps even all the way to the No. 1 spot, where they could've grabbed Zion Williamson.

But New Orleans defied the odds by claiming the top position, while the Hawks actually tumbled three spots below where they finished to No. 8. They also have the No. 10 pick, acquired from Dallas during last year's draft in the deal that brought Young to Atlanta in exchange for Luka Doncic.

So far, that trade has worked out quite nicely for both teams. Doncic looks like a star in the making. So does Young, who fearlessly guided the Hawks from the point guard position while displaying the sort of charisma that should set him up to become the face of the franchise.

Slowly but surely, Schlenk is building the sort of team he wants.

"What you see when you get to the later rounds of the playoffs — and you're even seeing in the regular season — is the position-less basketball," Schlenk said. "You have five guys out there that can space the floor and handle the ball and obviously defend multiple positions, those are the kinds of things we're looking for and will continue to look for."

Young averaged 19.1 points and 8.1 assists, teaming with second-year player Collins to give fans in the A-T-L a promising core.

Collins was a steal in the 2017 draft at No. 19 (for those who may have forgotten, Markelle Fultz and Lonzo Ball went with the top two picks). With a high-flying style that still shows plenty of potential upside, the 6-foot-10 Collins teamed with Young to lead the Hawks in scoring (19.5) and rebounding (19.8).

But, as Schlenk was quick to point out, the overhaul is still a work in progress.

"Look, we won 29 games. We're still looking for best players available," he said. "Whatever that position is, we're going to take 'em and figure it out on the back end."

While the top three picks appear locked in — Williamson to the Pelicans, followed by Ja Morant (Memphis) and R.J. Barrett (New York Knicks) — the situation is more fluid after that.

New Orleans is also set to go again at No. 4 as part of the massive haul it got for trading Anthony Davis to the Lakers, but the Pelicans might be persuaded to deal that pick for Atlanta's two choices. That would allow the Hawks to grab either De'Andre Hunter of Virginia or Jarrett Culver of Texas Tech, a pair of wingmen who seem to have the games to step right into the NBA.

Either would be an intriguing fit in in a lineup that already includes Young and Collins.

If the Hawks can't work out a deal, Duke forward Cam Reddish and Texas centre Jaxson Hayes are among the players who might be available at Nos. 8 and 10. Neither is as polished as Hunter or Culver, but both present an intriguing upside that might work out even better for the Hawks in the long run.

The 17th pick could provide a valuable addition as well. The middle of the draft has been a sweet spot for Schlenk the last two years, with shooting guard Kevin Huerter coming aboard last year at No. 19. He started 59 games and averaged just under 10 points a game.

After that, the Hawks have two more picks in the second round at 35th and 41st. They also had the No. 44 pick before trading it to Miami on Wednesday for a conditional 2024 second-round pick and cash considerations.

"What we're finding with this draft is there's a lot of depth to it," Schlenk said. "We like a lot of the guys there."

Yep, it's shaping up to be another intriguing draft night for the Hawks. Even if the lottery didn't work out like they hoped.