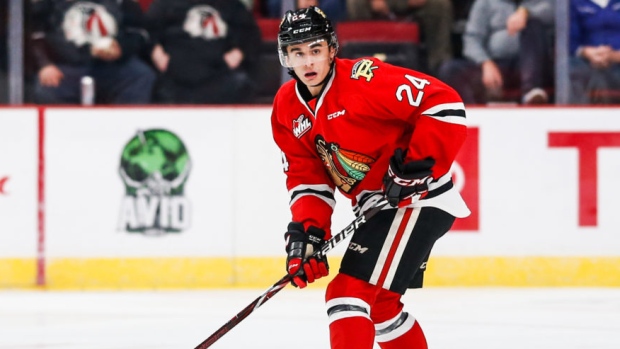 On Monday, TSN Hockey Insider Bob McKenzie unveiled his final National Hockey League draft prospect rankings. Seth Jarvis came in No. 18, but McKenzie noted that, after a strong second half, the Portland Winterhawks centre had emerged as a legitimate threat to become a top-10 pick.

"I heard about it over Twitter and getting tagged with things," Jarvis said with a smile. "I had to seek it out and see it for my own eyes and hearing those words from Bob really motivated me, knowing I have a chance to be a top-10 prospect. At the beginning of the year I was in that second-to-third-round range, so to be able to jump as high as I did has been awesome."

Jarvis didn't start slow this season, per se, but he wasn't at his best. A series of heart-to-heart conversations during the holiday break brought him a sense of clarity.

"I was definitely feeling a little bit of the draft pressure in the first half," Jarvis admits. "I had expectations for what I wanted to do, and I wasn’t playing as good as I thought I could. I talked to a couple of my coaches, my dad, a couple buddies back home over the Christmas break and I came back refreshed and ready to make a push."

Given what was lost this season, there’s never been more uncertainty - or intrigue - surrounding an #NHLDraft year.

Check out the 93 players & 7 honourable mentions in our final prospect ranking by @TSNBobMcKenzie...

"I played with a lot more confidence, a lot more freely," Jarvis explained. "​I just really let myself play loose. I play my best hockey when I'm having fun and just kind of messing around out there. I was playing free and not afraid to make mistakes and that'​s when I really stepped it up."

While Jarvis has seen his draft stock rise, he continues to face questions about his size. Listed as 5-foot-10, 175 pounds, there are concerns about how effective he'll be at the next level. The 18-year-old says it's a constant conversation point during interviews with NHL teams.

"I try to make it known that it won't matter," Jarvis said. "I understand that I'm not the biggest guy on the ice and that might scare people, but I try to emphasize the heart and the grit I play with, which really pushes me through those situations when I'm against a bigger d-man or tougher competition."

The Winnipeg native spoke to TSN via Zoom this week and explained how his hockey IQ helps him get the better of bigger players. Jarvis also explained how playing football helped him in hockey and how he managed to get a pair of misconducts this season despite being named the WHL's most sportsmanlike player.

How much bigger and stronger do you think you will get?

"The weight comes on pretty easy now. Through this quarantine I think I've been able to put on maybe six pounds of muscle. And the height, I think I have, hopefully, two more inches in me. I want to hit that 6-foot mark, that'd be great. Whatever I can get I'll take."

Are you basing that on genes?

"Yeah, my dad is a big guy. He's about 6-foot-2 and we have the same body type and he grew late and that's what everyone's expecting from me."

How does your hockey IQ help you get the better of bigger guys?

"Just being able to see holes and see defencemen making a mistake and being able to capitalize on that. I've gotten a lot better at reading players and being able to use my body to shield myself. I think my ability to find those little gaps and holes to make plays and skate through is something that's really improved."

This Seth Jarvis kid on @pdxwinterhawks might be okay at hockey. What a goal pic.twitter.com/PWMWPMzjAY

The player McKenzie heard scouts bring up when talking about you was Mitch Marner. Who is your NHL role model?

"I love Brayden Point. He has that compete and grit that I really adore. He's able to be a smaller-body guy and still really dominate the game. I'm honoured to be even in the same conversation with Mitch, he's an incredible player and somebody I definitely get a lot of my creativity and a lot of my skilled plays off of, but overall I compare myself more to Brayden Point."

Your dad, Raymond, played football and is a high school football coach. How much football did you play and why did you ultimately choose hockey?

"I played football for about six years growing up. I was a quarterback. I played until I was 13, which is when hockey gets a little more serious and time consuming. Football was always a big love of mine. Those two sports went hand in hand, and playing football helped with hockey when it comes to skating through checks and keeping your feet moving. When I had to make the choice it was a tough one, because I played football almost as long as I played hockey. When I made the choice, it was because hockey was my first love and what I fell in love with from the start."

Was your dad disappointed when you picked hockey?

"He was a little disappointed, because he enjoyed watching me play football and he could give me a little more advice in that sport, but he knew hockey was what I wanted to do, so he was fully supportive."

What advice have you received from former Portland Winterhawk and fellow Winnipeg native Cody Glass?

"Cody's been a big help for me. He's someone I can reach out to all the time. He just preached how you can't look into things, whether it be draft lists or stuff like that, and to keep off social media as much as you can. That's something I strived to do, and I just zoned in on the game and what's going on around me and with my teammates rather than having my head buried in those lists. And lately he's been someone I can rely on with interviews – whether it's tough questions that might be asked, or just asking him what I can expect. He's really mentored me that way."

You were named the WHL's most sportsmanlike player, but twice this season you received a 10-minute misconduct, both times for a mouth guard infraction. What happened there?

"Well, growing up I always had trouble with my mouth guard and chewing on it and it's always kind of out of my mouth. Coming into the year, my coaches even stressed it to me that I really need to keep it in my mouth or else that will happen and unfortunately I got caught a couple times. But it’s something I’ve definitely worked on. Usually when I get nabbed is when I'm focused, and I start chewing on it and it comes out my mouth. I think when the ref sees the one side of it hanging out of my mouth that's when they usually get me."

Sportsmanlike awards can be overlooked or misinterpreted, what do you think the award says about your game?

"It says that I play on the edge and aggressively, but I know the limits and I don't want to hurt my team by taking a penalty. I just play on that border where I make sure I'm effective and physically engaged, but not taking penalties."

Your brother, Kayden, who is six years older, works as a coach with RINK Training Centre in Oak Bluff, Man. What's the biggest thing he's taught you?

"He's taught me the power of working hard. Right now he's balancing university courses, work and still trying to have a life outside all of that. He's someone that's never been really given anything ... Even growing up, he was a smaller player and someone who got overlooked a little bit, but at the end of the day, he made it to a high level of junior hockey and made me really proud. He showed me that I really have a chance to do this as well. He showed me the power of hard work and how far that can take you."

How hard are you working now?

"I'm lucky to have a gym downstairs and my dad, being a football coach and a gym teacher, he has that background in physical education, so he's helped me tons. Thankfully the gyms opened up here about a month ago and I've been able to get back into a normal type of schedule. I've just been putting my head down and working as hard as I can, because I know this is a time where I can take strides, improve my body and improve my overall mass, so it's something I've really taken advantage of."