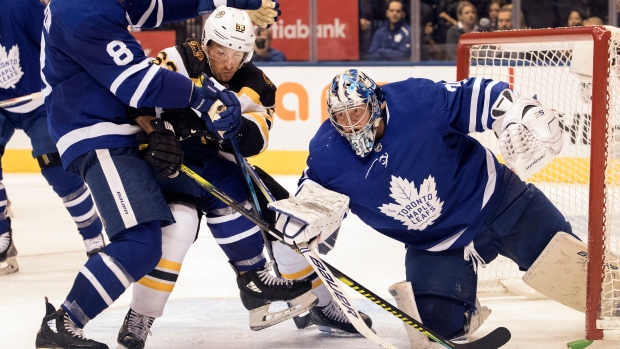 TORONTO – After Frederik Andersen successfully backstopped the Toronto Maple Leafs to a 4-3 overtime win against the Boston Bruins on Saturday with a terrific 43-save performance, head coach Mike Babcock couldn’t help but declare, “it looks like he’s back.”

But Andersen isn’t sure he ever left.

“That's his judgment I think; he looks at more tape than I do,” Andersen said with a wry smile following the Leafs’ practice on Sunday. “It was a good game for me personally of course, but I don't want to worry too much about what's happened before. I just try to push through and be as good as I can. Sometimes you feel really fired up and I think yesterday was a good example of how easy it is to get ready for a game like that.”

October has perennially been Andersen’s weakest month of the season, dating back to when he first joined the Leafs via trade from Anaheim in June 2016.

Over his first three seasons, Andersen was a mediocre 14-11-3 in October, with a collective .897 save percentage. His first six starts of this campaign prior to Saturday’s start had been similarly average, amounting to a 4-2-0 record, .893 save percentage and 3.14 goals-against average.

But against the Bruins, Andersen was once again the star the Maple Leafs needed him to be.

“He's relaxed, and he's square, and he's not overdoing things and not getting himself in any trouble,” Babcock said of what makes Andersen great. “I thought the way the game played out last night, he had a couple of quality chances against in the first, but then in the second period they had some real chances. I thought he was really good for us last night and played real well.”

Moving forward, Toronto could use a lot more of Andersen at his best. The team has already lost its top centre John Tavares for at least two weeks to a broken finger, and now Andreas Johnsson’s status for the coming week is uncertain after he missed the third period of Saturday’s game with a leg injury and didn’t participate in practice on Sunday.

Babcock said X-rays on Johnsson’s leg were negative and he isn’t expected to miss much time, but any absence of another top-six forward will necessitate further line juggling for Toronto. The stabilizing presence Andersen offers in net tends to have a calming effect on the rest of his teammates in times of flux.

“He's just really even-keeled, and I think that's a trait that all the top goaltenders have,” said Auston Matthews. “They just don't get rattled by much, nothing really bothers them. That’s something [he has] and I think it just gives us confidence. No matter what mistake is made on the ice, he's just going to get back in the net and be confident in himself and his ability.”

That composure is an attribute Andersen has diligently honed over the course of his career, noting that it’s balanced out by a healthy competitive hunger.

“I think you always want to try to move on from everything that's happened, good or bad,” Andersen assessed. “Doesn't mean you can't be fired up and wanting to play good. I think the better you can move on and be focusing on what's next, not let the past affect you [or] worry about it too much, that's the way I hope to be even-keeled as much as possible.”

Over the years, Matthews has developed a close bond with Andersen off the ice too, and said that steadiness he displays between the pipes often creeps into other aspects of his personality as well.

Andersen agreed he can be “pretty dry, pretty sarcastic,” but that it wasn’t a quick process coming out of his shell in Toronto. Since 2016, Andersen has started more games (199) than any goalie in the NHL, and recorded the second-most wins (112). He plays every night for the Leafs unless it’s the second half of a back-to-back, and then his back-up Michael Hutchinson takes the crease while Andersen gets a breather tracking face-offs on the bench.

The workload has come with a fair share of scrutiny, both for how Andersen’s performed under it and why Babcock has refused to lessen it season over season. Now on the cusp of playing his 200th game for the Leafs on Monday against Columbus, a milestone only 12 other goaltenders in franchise history have ever reached, Andersen can appreciate how far he’s come, while still reaching towards what’s next in his evolution.

“It just goes fast when you're having fun,” Andersen said. “That's a cool thing. I enjoy my time a lot. I'm pretty comfortable now. I’m in the process of becoming as good as possible and I think that's really what I've been trying to enjoy, just having fun coming to the rink every day. That can be the most important thing to being successful here.”