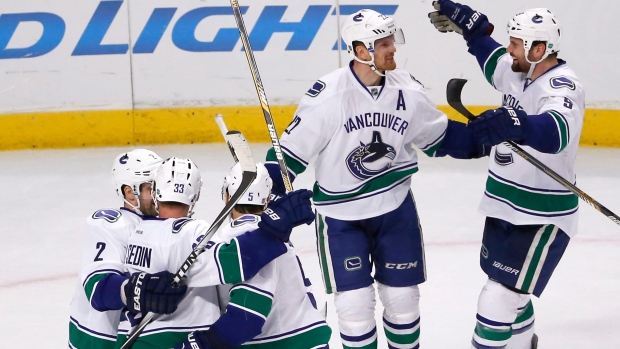 VANCOUVER, BC – Eight hundred and nineteen players have laced up their skates in the National Hockey League this season. Only 24 of them have more points than Daniel and Henrik Sedin. To take it one step further, 170 players aged 31 or older have suited up in the NHL this season. Only two of them have produced more points than the Canucks veterans and scoring leaders, who turned back the clock late in Wednesday’s 5-4 Vancouver victory in Chicago, showing flashes of their 2011-era selves.

Are they among the best players in the game as they were when Henrik and the Daniel won back-to-back scoring titles five years ago? Of course not. Time marches on and the Sedins are now 34-year-old veterans in their 14th seasons in the NHL. They have slowed and so, too, has their point production. They are no longer elite scoring machines who regularly take control of hockey games, turning opponents into pretzels and wowing spectators with their remarkable telepathy and play-making abilities. No, those nights are few and far between these days – although the work Henrik did to set up Daniel on the overtime winner at the United Center certainly could have been taken from the Sedins highlight reel at previous stages of their remarkable careers.

So for the multitude of callers to the TSN 1040 post-game shows frothing at the mouth that the Sedins don’t do enough for the Canucks, a second glance at the numbers -- and a reality check -- is required. In a season that may not have a 100-point producer, the Sedins give every indication that they will stay with the pack of players putting up points at a rate slightly below on per game. After the win in the Windy City Wednesday, Daniel and Henrik had matching totals of 46 points – 16 off the lead held by the Blackhawks Patrick Kane, but just 10 behind Sidney Crosby who currently sits in fifth in overall scoring.

And when judged against the output of their peers -- players over 31 (and again remember they are 34) -- the Sedins trail only countryman Henrik Zetterberg of the Red Wings (48 points) and San Jose’s Joe Thornton (47 points). For players of that vintage, the Sedins are still among the best in the league at what they do. In fact, no one in the 31+ club has set up more goals this season than Henrik Sedin who’s tied for fifth overall in the league in helpers with 37. That hardly screams of a player who is washed up.

The biggest issue seems to be one of expectations judged against the salaries the Sedins are drawing in the first year of their matching four-year $28-million extensions signed in November of 2013. The fact of the matter is they are both being paid $7 million this season, and according to nhlnumbers.com, are tied for 19th in terms of their overall league cap hit and tied for 27th in actual money-drawn in salary; hardly numbers out of line for players in the top-25 of NHL scoring.

Now, this is year one of their four-year extensions, and where the Sedins’ point production will be at the end of these deals certainly remains to be seen. But it’s not their fault that they are the age they are. And it certainly shouldn’t be held against them that they remain the Canucks’ best players at this stage of their careers. It’s not their job to find the next wave of scoring stars to take their spots on the depth chart. In fact, it must be pointed out that their production this season has come despite any semblance of second-line support or much help from an under-performing blueline. The way the Canucks are currently constructed means the Sedins face the other team’s top defenders on a nightly basis. Even at home when they have last change and should be able to dictate match-ups, the Canucks lack of reliable and regular secondary scoring allows opponents to hedge their bets in order to load up on the twins in an effort to slow them down.

The take away here – and it won’t be popular with some who insist on seeing things the way they want to -- is that Daniel and Henrik Sedin are having pretty good seasons. They don’t have many huge nights any more, but despite what their critics suggest (and the numbers refute) they don’t disappear for long stretches either.

Will they be able to steer the Canucks to their stated destination of a playoff spot in the Western Conference this season? That remains to be seen. And certainly the way the Sedins perform against top teams in the league down the stretch will go a long way to determining the ultimate success Vancouver has over the next few months.

But Wednesday night  in Chicago was both a trip back in time and a reminder that from time to time the Sedins are still capable of taking games into their own hands. It also drove home the point that while the Canucks as a team still have issues to iron out – the Sedins aren’t among them. They’re doing just fine.