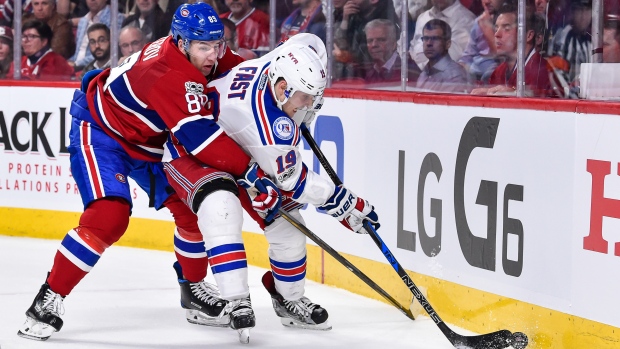 Despite rumours to the contrary, Nikita Nesterov's agent says the restricted free agent has not signed in the KHL and plans to remain in North America.

Nesterov is listed on the KHL's website as a player on Traktor Chelyabinsk but his agent Dan Milstein said rumours he's returned to Russia are "absolutely false."

@DarrenDreger According to official KHL website, Nikita Nesterov moved to Traktor Chelyabinsk. Is it true? pic.twitter.com/VecKg1BMwv

Rumors out of KHL and Traktor Chelyabinsk that Nikita Nesterov signed - ABSOLUTELY FALSE. Nesterov wants to play in the NHL

Nesterov is arbitration eligible with the Montreal Canadiens, who acquired the 24-year-old from the Tampa Bay Lightning in January.

He scored one goal and added four assists in 13 games upon joining the Canadiens, finishing the year with a total of four goals and 17 points in 48 games between the two teams.

Nesterov dressed in two of the team's six playoff games, failing to record a point.