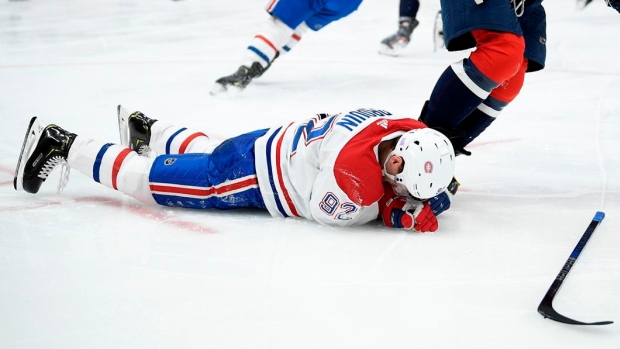 Canadiens head coach Claude Julien did not give a specific timeline for Drouin or Paul Byron would both miss "weeks." Drouin and Byron were both injured in Friday's 5-2 win over the Washington's Capitals.

After undergoing wrist surgery, Jonathan Drouin's recovery period is expected to be a minimum of eight weeks.#GoHabsGo https://t.co/xRV5Ur9tfr

Drouin has seven goals and 15 points in 19 games this season while averaging 16:35 of ice time per game.

"We're in a sport where injuries unfortunately happen," Julien said Monday. "We're just going to hope it's shorter than longer and we're going to hope he comes back the way he left us."

"Obviously, he's one of our best players," Canadiens forward Max Domi added of Drouin. "To be missing him now, it's a tough pill to swallow. Other guys are going to have to step up. ... We all know we have the character in here for guys to step up.

Byron, 30, has one goal and four points in 19 games this season.

Montreal, riding a six-game point streak, is in Columbus on Tuesday to face the Blue Jackets before returning home to meet the Ottawa Senators on Wednesday.