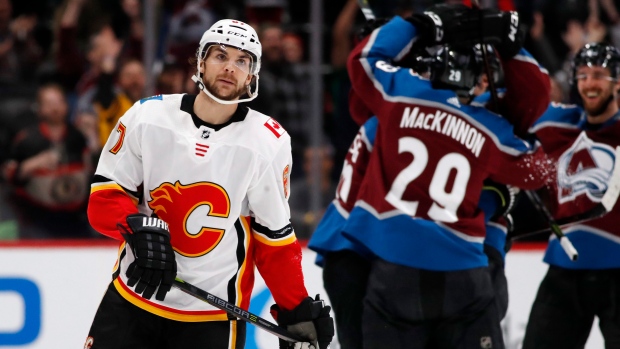 Agent Allan Walsh was not impressed by the Calgary Flames making his client Michael Frolik a healthy scratch for Saturday's loss to the Vancouver Canucks.

Walsh took to Twitter on Sunday to question the decision-making of Flames head coach Bill Peters.

"Many people in Calgary have been reaching out asking why Michael Frolik is a healthy scratch," Walsh wrote. "Keeping one of the teams most efficient and versatile forwards in the stands marginalizes and devalues a great team player. Head coach’s attempt to run a good player out of town?"

"I'm sorry but on this (situation) I don't think you are going to get (answers) from me," Frolik said, per the Calgary Sun. "I want to focus on tonight's game and help the guys and fight for the guys tonight. With the ice time I had, I didn't get a flow in the game. Those things happen. But I'm back right now and I just want to battle for the guys and be good with (the second) line and focus on tonight's game."

Frolik returned from a 15-game absence due to an ankle injury on Dec. 22 and went without a point in two games before sitting out on Saturday. He has seven goals and a plus-3 rating in seven games this season. He is averaging 11:54 of ice time on the year, though he came in under that mark in each of his past two games since the injury.

He said Monday that he's not back to full strength since the injury, though he will return to the lineup for the team's final game of 2018.

"Obviously it's not perfect and it's not 100 per cent but I don't want to make any excuses," Frolik said. "I was skating before I went into the games and I said I'm ready. Obviously, I think it's going stick (around) for a little bit. But there's no excuse for the injury. I'll feel fine and obviously with the taping it's a little different but there's no excuse.

"I'll try to give it everything I've got tonight and we'll see what happens."

The 30-year-old was also a healthy scratch for one game in October after being relegated to the fourth line earlier in the season.

“It’s been a couple years, for sure,” Frolik said at the time. “It sucks. It’s not easy. But you just have to try and do things you can control and work hard and try to go out there and do something good.

The team used the following lines at their morning skate Monday: