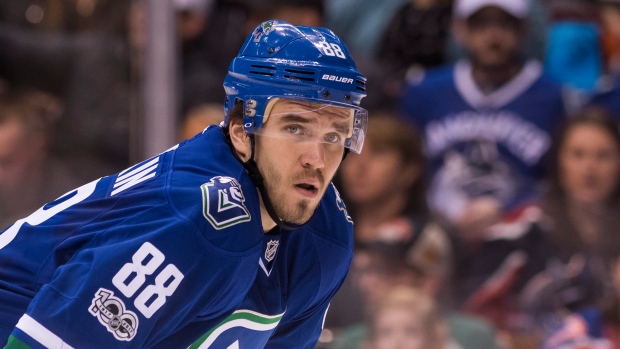 It appears Nikita Tryamkin could be headed back to the Vancouver Canucks after a three-year stint in the KHL.

Tryamkin's agent, Todd Diamond, told Ben Kuzma of the Vancouver Province that he has been in communication with Canucks general manager Jim Benning and believes the 25-year-old defenceman is ready to return to North America.

Kuzma: Benning & Diamond are talking, seeing if it’s doable to bring Tryamkin back

The Province’s Ben Kuzma says Jim Benning and Todd Diamond have had a few talks about if it’s doable to bring Tryamkin back. Ben says it’s not as easy as signing him because the Canucks have contract issues, UFA’s to sign this summer & we don’t know what the salary cap will be next year.

“His game and his style are more suited for the NHL than the KHL,” Diamond said. “I believe it will be an easy transition. And having been there before, he kind of knows what to expect. He knows what’s going to be demanded of the coaching and training staff and he’s committed.

“He never lost hope. He’s got a lot of pride and always wanted to come back. And this is probably the right time because you want this unit (roster) to grow together.”

Diamond added, however, that the two sides will likely have to wait to reach a deal until the fate of the current season is decided and next year's salary cap is set.

“Things are obviously stuck because of the uncertainty of the near future and what affect it’s going to have on the numbers,” Diamond said. “We have to see what the cap is going to look like and if we can march this thing forward, or if we can’t.”

A third-round pick of the Canucks in 2014, Tryamkin first joined the team once the KHL season concluded in 2015 and posted one goal and two points in 13 games. He appeared in 66 games the following season, posting two goals and nine points before electing to return to the KHL after missing the playoffs under then-head coach Willie Desjardins.

Tryamkin finished the KHL season with two goals and 11 points in 58 games with Yekaterinburg Automobilist this season, adding two assists in five playoff games. He had a career-high nine goals and 25 points in 51 games upon returning to the KHL in 2017-18.