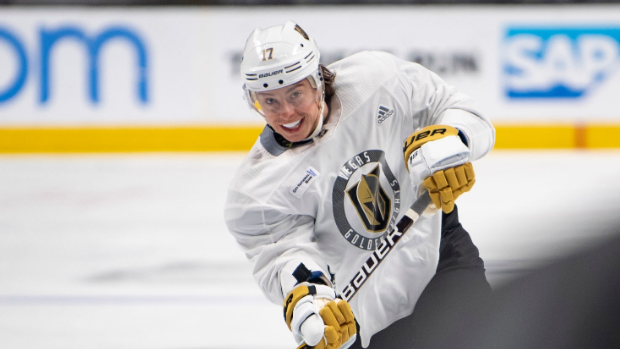 The agent for Vegas Golden Knights winger Nikita Gusev told Russian news outlet Championat that he will look into having the winger rejoin the KHL if Gusev does not receive a contract or a trade by an undisclosed date.

Yuri Nikolaev, who represents the restricted free agent, said he’s aware the Golden Knights have received trade offers for Gusev, but noted the 27-year-old would prefer to re-sign in Vegas. Gusev joined the Golden Knights ahead of the playoffs this spring after nine seasons in the KHL but didn’t appear in a game with the team. He led the KHL in points in 2018-19 with 17 goals and 82 points in 62 games with SKA St. Petersburg before joining Vegas.

"The rights to Gusev in the KHL belong to SKA," Nikolaev said, per a Google translation. "There is a certain deadline, after which I will be forced to enter into concrete negotiations with the 'Army' club.”

Jesse Granger of The Athletic reported earlier this month that Gusev is looking for an annual $4 million salary on a two-year deal this off-season, while the Golden Knights had countered with an offer of a $2 million AAV. Golden Knights president George McPhee admitted to The Athletic that he’d received calls on Gusev from other teams, but noted he was still working to re-sign the Russian forward.

“There’s definitely an interest in him,” McPhee said. “We’ve had people call us on him. We’ll see what develops. I can’t tell you what will happen, but we’ll work on it. He’s been very, very good on the international stage. He wants to play in the NHL. He worked very hard to get over here, and we’re going to accommodate him one way or another, either here or with another club.”

The cap-crunched Golden Knights are already $3.5 million over the $81.5 million cap and have just $1.7 million left in space with David Clarkson's contract shelved on long-term injured reserve. Gusev is the team's lone remaining restricted free agent.