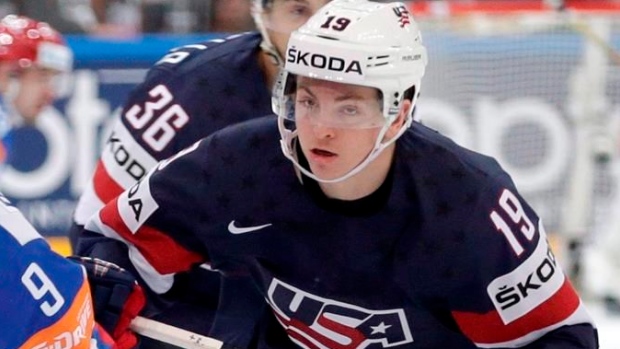 Buffalo Sabres forward Jimmy Vesey is sticking with his plan to become an NHL free agent on Tuesday.

And Vesey's agent, Peter Fish, told The Associated Press on Monday that college hockey's top player is in no rush to sign his first contract.

"It's certainly not going to be tomorrow," Fish said. "I would say the earliest may be Friday or Saturday, but I wouldn't expect it to drag on much into the following week."

Fish noted the timetable will depend on what teams express interest once they're allowed to begin contacting Vesey after midnight. After that, Vesey plans to narrow the field to "a handful" of teams to present formal offers.

One team already in the mix is Buffalo, which acquired the 23-year-old's rights in a trade with Nashville in June.

"Tomorrow, we start to find out what our opportunities are, but I can tell you from Buffalo's standpoint, Jimmy is pleased with what they've done and said thus far," Fish said.

The two sides have had several discussions, with Fish saying, "We have a very good understanding with everything in regards to Buffalo."

Vesey was selected by Nashville in the third round of the 2012 draft and last season won the Hobey Baker during his senior year at Harvard. In March, Vesey rejected signing with Nashville by informing the Predators he planned to pursue free agency.

The Sabres took a calculated risk in trading one of their four third-round draft picks to essentially gain exclusive negotiating rights with Vesey. Sabres officials travelled to Boston to meet with Vesey in July, and the two sides also had talks this past week.

Vesey's decision comes down to which team he believes best fits him and not how much money he's offered. NHL rules limit teams to signing Vesey to a two-year, entry-level contract with a base salary of no more than $925,000, plus signing and performance bonuses, which are also capped.

Buffalo has one advantage in centre Jack Eichel, who is coming off a solid rookie season after being selected second in the 2015 draft. Eichel and Vesey grew up together in Massachusetts, share the same agent and spent part of this summer playing together in a summer league.

Vesey's hometown Boston Bruins could be a contender, as well as the Toronto Maple Leafs, whose scouting staff includes Vesey's father, James.