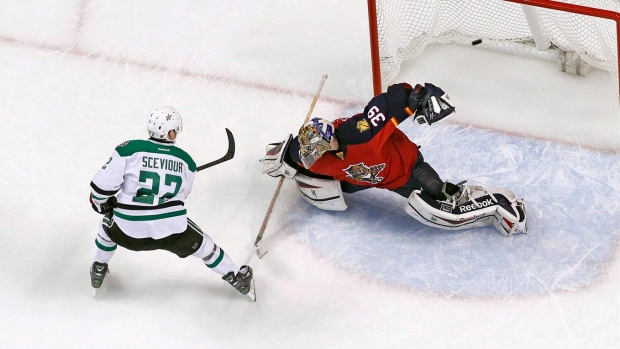 The American Hockey League is providing a sneak peek of what overtime could soon look like in the NHL, and it appears to be a blockbuster hit.

Experimenting with three-on-three play in overtime has dramatically increased the amount of AHL games decided in overtime. Total shootouts are down 12 per cent from last year, and of those games that get to overtime, they're down more than 40 per cent.

That's strong evidence for NHL general managers, who will debate adding three-on-three next season at their annual meeting that begins Monday in Boca Raton, Fla. If recommended, it would go to the joint NHL/NHLPA competition committee to consider.

"We always went to the three-on-three and for the fans it was really exciting: breakaways, two-on-ones all over the place," Anaheim Ducks defenceman Korbinian Holzer said of his experience with the AHL's Toronto Marlies. "All the games I played, they were decided by the three-on-three."

It's clearly working. Last season under the NHL's current four-on-four, five-minute overtime format, 64.7 per cent of AHL games that went to overtime also ended up in a shootout.

Through March 2 this season, with three minutes of four-on-four followed by as many as four minutes of three-on-three, just 23.2 per cent of overtime games went to a shootout compared to an incredible 76.8 per cent decided by actual goals.

Some goalies don't like being under the gun more in overtime, but most in the AHL are big fans of the change.

"For me, I like to end a game playing hockey, not a stationary shootout," Binghamton Senators coach Luke Richardson said. "The whole sport is built about teamwork and that's where it should end."

Many NHL general managers don't like too many points being awarded based on a skills competition and have said they would like to reduce the number of games decided in the shootout.

A total of 13.8 per cent of NHL games through March 2 this season went to a shootout, an increase from 11.8 per cent when it was first implemented in 2005-06. A majority of games that go to overtime also go to a shootout (56.3 per cent).

AHL overtime begins four-on-four and switches to three-on-three at the first whistle following the three-minute mark.

"It actually feels more like when you're playing outside hockey with your friends," former Chicago Wolves defenceman Petteri Lindbohm of the St. Louis Blues said. "You get chances all the time, you get so much space that you can try some other moves."

With so much open ice, the pond hockey that results is full of odd-man rushes and scoring chances. Rocco Grimaldi of the San Antonio Rampage, who leads the AHL in overtime goals, said that with "run-and-gun hockey, someone's bound to score eventually."

"Anything can happen, that's for sure," Charlotte Checkers goaltender Drew MacIntyre said. "Three-on-three's a beast. Four-on-four whatever, nothing really changes. But three-on-three it's just a different animal."

The most common argument against three-on-three is that it's almost as much a departure from actual hockey as the shootout. It's very different from the traditional five-on-five.

"The pros of it: The game gets done earlier because for the most part you see a goal scored," said Todd Nelson, the former Oklahoma City Barons coach who is now behind the Edmonton Oilers bench. "The cons, for me, is just maybe I'm old school with hockey, so it might be a bit gimmicky."

Richardson argues that it is real hockey because it can happen with enough penalties in the course of any game. The Tampa Bay Lightning and Boston Bruins played four-on-three in regulation Thursday night, and that was enough to cause back-and-forth, high-paced excitement.

The other problem is making games longer, something Arizona Coyotes GM Don Maloney expressed trepidation about. Players also could argue against tacking on two extra minutes a game during what's already the grind of a long season.

"It is pretty taxing," former Marlies and current Maple Leafs winger Brandon Kozun said. "If you get stuck out there it's hard to change if you don't have the puck."

But most who experienced three-on-three agreed it was better to see games decided in overtime than the shootout.

"You have more of the real feelings, like you felt like you lost the game in overtime because you're playing a moving part of the game rather than the shootout," Richardson said. "It's real exciting when you win and you feel it when you lose."

Seeing the AHL suceed at cutting down shootouts, Maloney said there seems to be some positive momentum to get three-on-three into the NHL.

"We just can't brush this off," he said. "We have to take a harder look at this for the National Hockey League."