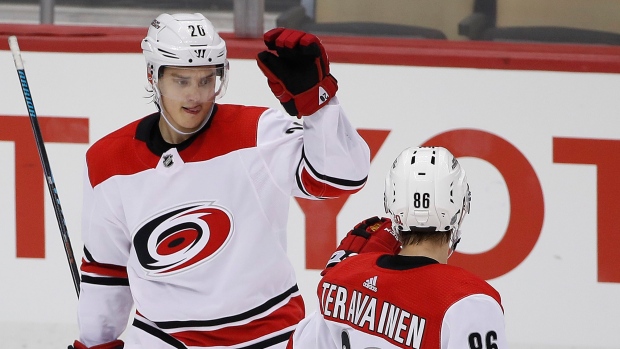 "We were good with our sticks and the puck pressure was tremendous all night," Ward said. "You give (Pittsburgh) time and space, and they'll make you pay with the players they have. I think we're playing the right way and playing with confidence."

The Hurricanes also beat Pittsburgh 2-1 last Friday night in Carolina. Aho got the winning goal in the first matchup, and this time he iced the Penguins after Jeff Skinner and Teuvo Teravainen scored. Aho assisted on Teravainen's goal and has 10 points during a six-game point streak.

"(Aho) is a little bit underrated around the league, but we know how good he is," Hurricanes coach Bill Peters said. "That third one was a huge goal."

Ward finished his first shutout of the season and 26th of his career. He has wins in 10 of his last 13 games and has gotten Carolina a point in eight straight.

"It's always great to get a shutout," Ward said. "I don't get too many of those in my career."

Teravainen scored his 11th and added an assist and Skinner scored his 13th to help Carolina snap a two-game skid. The Hurricanes have won eight of their last 11 and have points in 30 of 38 games against Eastern Conference teams dating to Feb. 24, 2017.

The Penguins have dropped eight of their past 12 and haven't won back-to-back games since Dec. 1-2. Pittsburgh has been held to one goal or fewer in six of its past 11 games. Matt Murray had 29 saves.

"We haven't put games together," Penguins captain Sidney Crosby said. "If we knew the reason, I think we'd find a way to put them together, but I think the main thing is our compete level and finding that nightly."

Pittsburgh sought a more consistent effort after blitzing Philadelphia two nights earlier. The Penguins scored four goals on eight shots in the second period Tuesday against the Flyers, and their five goals equaled a single-game high for this season.

Instead, Carolina kept the Penguins in check. Pittsburgh didn't get its 10th shot on goal until there was 1:25 left in the second period.

Skinner opened the scoring in the second period. He forced Ian Cole into a turnover at his own blueline, skated alone on Murray and scored with a glove-hand wrist shot. Skinner, with seven points in his last nine games, passed Pat Verbeek for seventh on Carolina's career goals list.

Carolina scored the game's second goal later in the period. A passing sequence between Jaccob Slavin and Aho left Murray out of position and a wide-open net for Teravainen.

In the third, Aho took a centre-ice touch pass off the rush from former Penguin Jordan Staal and worked around Justin Schultz before slipping a shot between Murray's pads. Aho tipped Teravainen's shot behind Murray to give Carolina a 4-0 lead later in the period.

"I thought we made it extremely difficult on them with our pressure, especially on their top-end players," Ward said. "We didn't give them a whole lot of space and it seemed like that frustrated them throughout the night."

Hurricanes: Continue a four-game trip at Boston on Saturday night.

Penguins: Will visit the New York Islanders on Friday night.